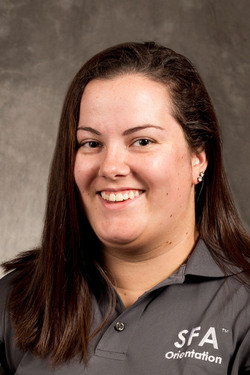 Maggie Wright of Flower Mound was appointed by Gov. Greg Abbott to serve as student regent on Stephen F. Austin State University's Board of Regents during the 2017-18 academic year.

NACOGDOCHES, Texas - Maggie Wright of Flower Mound has been appointed by Gov. Greg Abbott to serve as student regent on Stephen F. Austin State University's Board of Regents during the 2017-18 academic year.

Wright, who will graduate from SFA this month with a bachelor's degree in criminal justice, will immediately begin pursuing a master's degree in public administration beginning this summer.

"Being chosen as student regent is a great honor," Wright said. "I look forward to being able to share the student body's perspective with the Board of Regents. I hope to make the most of my time as student regent by attending as many events as possible and attempt to make my mark on SFA."

"As student regent, I want to learn about the different university policies and procedures; being a CJ major has made me very interested in all of the behind-the-scenes aspects of things. I love this school and the people here so I hope to be a role model and lead by the SFA Way. I want to make the school the best it can be."

Wright's first official duty will be attending the quarterly meeting of the SFA Board of Regents July 24-25.