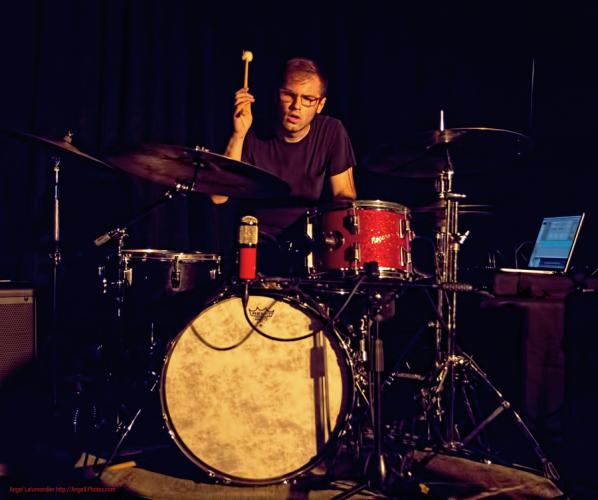 Sean Hamilton will perform a guest percussion recital at 7:30 p.m. Monday, Sept. 11, in Cole Concert Hall on the SFA campus.

The program is entitled “LOCI” and is comprised of a single evening-length composition for solo drum set and electronics. “LOCI” is one work from a series of pieces for this instrumentation that are written to explore the symbiotic possibilities of acoustic and electronic sound in an improvised setting, according to Hamilton, who began working on these pieces in 2015 and has performed them throughout the U.S. and in the United Kingdom.

“Since its completion in July 2016, I have performed ‘LOCI’ approximately 40 times,” Hamilton said. “In an average performance, audiences can expect a dynamic concert featuring combinations of intense and visceral drumming contrasted with soft and delicate percussion, static electronic ambient passages and noise-based textural passages.

“In addition to the use of traditional sticks and mallets, they will also find a wide array of alternative playing techniques and methods of sound production,” he added, “including moments when I may be producing sound with things such as a modified electric toothbrush, thin chains and aluminum foil, or by placing household objects (sheet metal, tin cans, nuts and bolts, etc.) on the drums in an effort to alter their natural sound.”

The SFA recital will be part of a large eight-week tour that will take Hamilton from Tampa, Florida, to the Pacific Northwest and back, with performances at a wide variety of venues, including Eyedrum Art and Music Gallery in Atlanta, Georgia, and Selectors Records in Vancouver, British Columbia.

Hamilton has presented performances as an artist-in-residence with Leeds Improvised Music and Experimentation (LIME) in the United Kingdom and as a featured performer at the Orlando and Asheville Fringe Festivals, the Anxious Sound Series in New Orleans, and WKCR-FM New York’s Afternoon New Music. He has given numerous lectures on improvisation and composition at universities throughout the U.S. and abroad. His original compositions include works for solo instruments, chamber ensembles, electroacoustic mediums, and fixed media that have been performed in the U.S. and Europe.