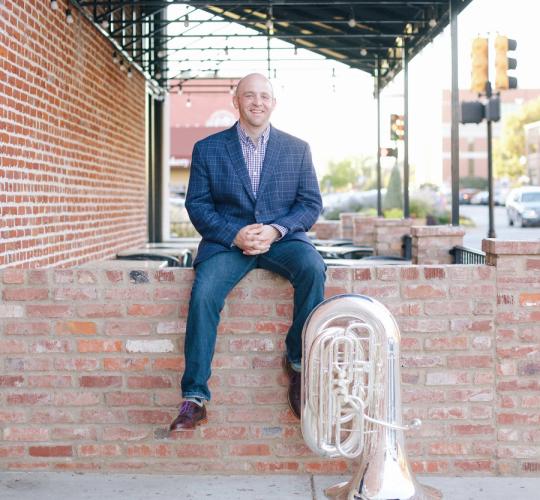 Kunzer is known internationally as a solo artist, chamber musician, educator, clinician and lecturer, having performed and taught coast-to-coast in the United States, Thailand, Mexico and Korea. In a collaborative performance with pianist Michael Scheider, the SFA tuba concert will highlight works by Michael Forbes, David Gillingham and Charles Small, among others.

“With dramatic mood changes and large leaping melodic lines, this piece will not disappoint,” said Dr. J.D. Salas, associate professor of tuba and euphonium studies at SFA. “It will be a concert favorite.”

Inspired by the nonsensical poem by Lewis Carroll of the same title, Gillingham’s “Jabberwocky,” also on the program, seeks to “capture the adventure and entertain the listener as much as the whimsical poem has over the years,” Salas said.

Written in 1976, Small’s “Conversation” duet has become a standard in the recital repertoire. Dr. Danny Chapa, low brass adjunct faculty member in the SFA School of Music, will perform with Kunzer on the piece.

Kunzer resides in Stillwater, Oklahoma, where he is lecturer of music at Oklahoma State University. He has performed with symphonies throughout the U.S. and has performed behind some of today’s great artists, including Jennifer Hudson, Carole King, Joshua Bell, Emmylou Harris, Martina McBride, John Fogerty, Andrea Bocelli, Arturo Sandoval and Willie Nelson. He has previously served on faculty at the University of Nevada, Las Vegas, and is the associate editor of New Materials for the International Tuba and Euphonium Association Journal.

As a collaborator, Scheider has performed recitals with violinists Frank Almond, concertmaster of the Milwaukee Symphony; Jun Iwasaki, concertmaster of the Oregon Symphony; cellist Boris Andrianov, 3rd prize winner of Tchaikovsky Competition, and many others. He is a regular performer with Mélange Musical, a chamber series in the Dallas/Fort Worth metroplex.

Octubafest is an event that occurs at many universities around the world seeking to highlight the tuba and euphonium for their solo and chamber repertoire.

The recital is part of the School of Music’s Calliope Concert Series. Admission is free. For more information, call the SFA Fine Arts Box Office at (936) 468-6407 or visit http://www.finearts.sfasu.edu/.