Linguist, author and creator of the Dothraki language speaks at SFA 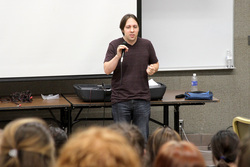 David J. Peterson, linguist, author and creator of the Dothraki language featured in HBO's "Game of Thrones," spoke to a packed house Thursday night at Stephen F. Austin State University about the art of language invention. Peterson began creating languages in 2000 and has created them for television shows and movies, including "Game of Thrones," "Emerald City," "Defiance," "Star-Crossed," "The 100," "Dr. Strange" and "Thor 2."

Peterson began creating languages in 2000, and he is one of the world's first full-time professional conlangers, someone who creates artificial languages. He has created languages for television shows and movies, including "Game of Thrones," "Emerald City," "Defiance," "Star-Crossed," "The 100," "Dr. Strange" and "Thor 2." He also has authored the books "The Art of Language Invention" and "Living Language Dothraki."

"It's quite different today to find that there are people who think it's cool that somebody creates languages and that they are interested in the topic and want to hear more," Peterson said. "It's a very different world from what it was 15 years ago."

During his discussion, Peterson recalled waking up when he was 17 years old with a desire to learn French and as many additional languages as he could. While studying at the University of California, Berkley, Peterson enrolled in many language courses, including Arabic, Russian and Esperanto, an international auxiliary language.

"I love coming here because I love talking about language. I feel the more people learn about language the better," Peterson said. "Language is the best invention we have as humans, and I think it would be incredible if people spent some time digging into it to find what language is about and why it's interesting."

Throughout the evening, Peterson discussed his path to his current career, his process for creating a new language, the importance of linguistics and more.

"If you are a student at a university, my advice is this: Take a language course. It doesn't matter which one," Peterson said.

This was Peterson's second time to speak at SFA. Event organizer Dr. Jessie Sams, associate professor in SFA's Department of English and Creative Writing, has timed Peterson's visits with her invented languages course, which she teaches every two years. Overall, she said Thursday's event was a success.

"I believe Peterson's presentations are a way for students in my class to get their work validated and to see that what we are doing in class has real-world application. Plus, his speech included great examples of how constructed languages reflect how natural languages work in real life," Sams said. "It's a way to get people excited about languages and linguistics."

One attendee, Mahailey Oliver, an SFA sophomore English major from Scurry-Rosser, Texas, was inspired by the presentation.

"I really liked that Peterson was an English major, too, because a lot of people think English majors can only be teachers, and we won't make any money, and that's not true. It was nice to see an English major make it big," Oliver said.

Dozens of SFA students and community members engaged in the discussion during the question-and-answer session.

"I love 'Game of Thrones' and George R.R. Martin. The language for Dothraki is very strong. It shows the characterization of that culture very well. I find it impressive that someone made that," said Marcus Dotson, graphic design senior from Dallas. "I feel a little bit closer to Jon Snow, Khal Drogo, and to the books and story. It makes me want to go home and pick up my books."