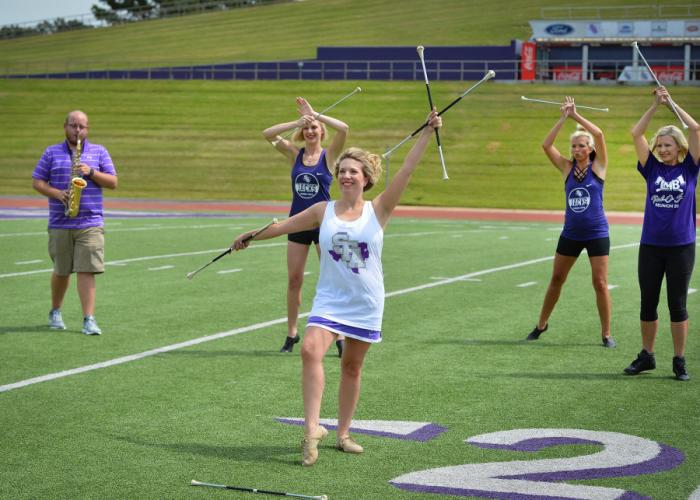 Plans are in place for the SFA Lumberjack Marching Band and Twirl-O-Jacks Reunion on Saturday, Sept. 16, with a pre-game show at 5:30 p.m. in Homer Bryce Stadium to feature band alumni and twirlers from several decades. Rehearsing for the performance are, from left, Brandon Beavers, Kristen Badders Conklin, Paige Pattillo-Brown, Chelsey Chandler Brewer and Candice Curbow. The SFA Lumberjacks will take on Incarnate Word at 6 p.m.


NACOGDOCHES, Texas – Generations of Lumberjack Marching Band musicians and twirlers will take the field Saturday at Homer Bryce Stadium on the Stephen F. Austin State University campus when they perform at 5:30 p.m. prior to the football game between the SFA Lumberjacks and Incarnate Word.

The Lumberjack Marching Band and Twirl-O-Jacks Reunion will feature a fun day of “friendship and fellowship” among alumni band members, according to Paige Pattillo-Brown, former SFA feature twirler and an organizer of the reunion and the newly established Lumberjack Band Alumni Association.

Last year, a reunion was held to celebrate the band’s 90th anniversary and the Twirl-O-Jacks’ 60th anniversary, but an official alumni organization did not exist at that time. Brown, along with Kristen Badders Conklin, assist each year in judging SFA twirling tryouts, and following last year’s tryouts, the two volunteered to help plan another reunion for 2017. They soon found themselves creating a new organization, Brown said.

There had been an SFA alumni band created years earlier by legendary East Texas band director Jim Hagood. Its purpose was to promote the band and provide scholarships, but the organization had become defunct, Brown said.

“I was a member of that organization, joining it in 2000 when I graduated from SFA,” Brown said. “But over the years, it ceased to exist. So we have had to create a new one from scratch. We created bylaws and contracts, so hopefully, we will now have a sustaining Lumberjack Band Alumni Association that will raise funds for the current band.”

Among the goals is to raise money to help feed band members who arrive on campus for three-a-day band practices weeks before SFA cafeterias open. Brown said the band alumni association hopes work with Dr. David Campo, director of The Lumberjack Marching Band, to identify other needs the alumni group can support.

“Dr. Campo has grown the band to 370 members, and that’s a lot of people to feed before the cafeterias open,” Brown said. “Hopefully, over time, we will be able to raise and save money to give out scholarships, perhaps eventually full scholarships. Our numbers are such, that if people come back and participate, this is a true possibility.”

Approximately 115 band alumni have registered as participants in Saturday’s reunion. Of those, 70 will perform in pre-game activities. Among them will be 87-year-old former SFA twirler Mary Jo Morris of New Braunfels, who was on the SFA twirling line in 1948 and 1949.

“So far, the alumni band members who have registered represent a combined 280 years of service to the Lumberjack Band,” Brown said.

Kappa Kappa Psi, SFA’s band service fraternity, will provide a hamburger-hotdog cookout lunch, alumni band association members will have a business meeting, and band alumni will participate in the SFA Alumni Association’s tailgating activities at the alumni tent. The alumni band will also attend The Lumberjack Marching Band’s performance at the Ag Pond prior to the pre-game show.