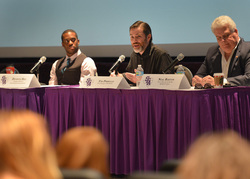 Panelists Devonte Hill, SFA alumnus and current producer and talent at Total Medulla Entertainment, a company Hill created; Tim Pirrello, SFA alumnus and post manager for AMS Pictures in Dallas; and Neal Barton, news director and anchor for KETK-TV in Tyler, discuss the challenges and rewards of working in broadcast media. Various media professionals participated in a panel discussion Tuesday at Stephen F. Austin State University during the first Super Media Bowl, which was hosted by the Department of Mass Communication.

Throughout the panel discussion, panelists spoke to students about the current state of the media, how it is changing, use of social media, advertising, public relations and more.

Dr. John Hendricks, Department of Mass Communication chair, said the department plans to host this event annually because of the opportunities it provides students.

"Students learn firsthand successful strategies to get ahead of the competition," Hendricks said. "Our students leave these sessions excited and motivated, and their choice of an academic major is reinforced."

Panelists emphasized the hard work necessary to work in the media industry and encouraged students to participate in internships and to network.

"These discussions allow students to hear from media professionals who have built successful careers and how they went about doing it," Hendricks said. "Also, events like this connect our students to the media industry, which begins the important process of professional networking."

The Super Media Bowl was divided into sections with multiple speakers in each timeframe. During the first quarter, panelists included Patrick Canty, publisher of The Odessa American; Paul Bryant, managing editor of The Daily Sentinel; and Jim Rossman, SFA alumnus and technology columnist for The Dallas Morning News. During this session, panelists discussed changes in journalism, specifically in print media, credibility and an objective media.

The second quarter was dedicated to broadcast media. Panelists included Devonte Hill, SFA alumnus and current producer and talent at Total Medulla Entertainment, a company Hill created; Tim Pirrello, SFA alumnus and post manager for AMS Pictures in Dallas; and Neal Barton, news director and anchor for KETK-TV in Tyler. Speakers agreed having passion for the industry was essential to being successful.

The final quarter focused on the radio industry and involved discussions concerning how to break into the business, behind-the-scenes work, internships, challenges and the future of radio. Panelists included Phyllis D., SFA alumna and executive producer of the Rod Ryan Radio Show in Houston; Johnny Lathrop, SFA alumnus and regional vice president of Townsquare Media; and Karah Leigh, SFA alumna and on-air personality for Houston's The Buzz radio show.

"Media Day was extremely successful," Hendricks said. "Any time students have an opportunity to learn from media professionals and then leverage that new knowledge to their benefit is a success."