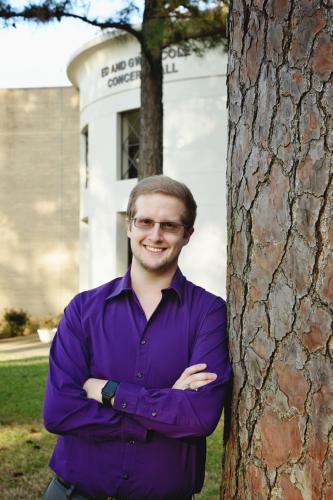 Kyle Henkel, who graduated from SFA in May with a Bachelor of Music, had his composition "Kandinsky Imaginations" premiered this past summer at the 5th Zodiac Music Academy & Festival in the south of France. Three days later, the same piece got its second performance at the Bruno Maderna Competition Composers Forum in Lviv, Ukraine, by members of the New York City-based Phoenix Ensemble.

The Zodiac Music Academy & Festival commissioned Henkel to write the work. While he was at the festival, Henkel worked closely with the performers during rehearsals to improve the piece, whose inspiration is based on three paintings by Wassily Kandinsky: Composition VI, White Line and Composition VIII.

"To compare my music to a painting by Kandinsky is intimidating already, but to do three works is frightening," Henkel said in an email interview. "To write something and have it compared to Kandinsky's work, I had to think outside of the box and use resources and techniques that may not be common in most works for this particular instrumentation – a trio with violin, cello and piano."

Henkel explains that one movement is percussive and demands that three players use methods of drumming on the violin and cello; clapping, knocking, finger snapping and vocalizing sounds in all three instruments; and finger muting in the piano (almost making a sound similar to a violin and cello pizzicato, or plucking).

"Overall, 'Kandinsky Imaginations' is an emotional, groovy and heavy-metal performance all wrapped up in a fun package," he said.

Henkel was not able to travel to the Ukraine to coach the performers, but because of that, it allowed the artists "freedom to interpret the whole piece," he said.

"At the Zodiac Music Festival, I was able to work with the performers every other day during rehearsals, refining the piece to what I was looking for in the music," he said.

"The more impressive the performers and/or location, the more credibility it gives the composer," Lias said, adding the majority of composers Kyle's age are getting mostly student performances in academic settings. "Some might be lucky enough to have a professional ensemble play a piece, or to have a new work premiered at a regional or national conference. Kyle's achievements are well above the norm, and reflect his dedication, talent and networking skills. To have an international performance by professional musicians would be impressive by itself, but this is not the first time it has happened."

Premieres of this level reflect what Lias described as the "mantra" of the composition studio at SFA: "Take Bold Steps."

"If all the excellent instruction they get at SFA is to pay off, it will only be because the students themselves step out of their comfort zone and dare to aim high," Lias said. "Of course, the students have to bring a lot of their own creativity to the table, but our composition studio is designed to provide the best instruction, along with the encouragement and support to foster growth and set students on their way to a successful life in music."

Henkel is working toward a Masters in Music Composition at Bowling Green State University in Bowling Green, Ohio. He is also working on three different commissions: a trumpet solo (with piano and percussion accompaniment), a clarinet work for a group of clarinetists he met in France, and a piece for the Zodiac Trio.

"I am excited to say that all three commissioned will receive world premiere performances next year," he said. "On the side, I am working on a few small projects with some friends that I love at SFA and an orchestra piece that may have a possible reading with the Toledo Symphony Orchestra."

Henkel's success thus far is just one example of the international footprint that the SFA Composition Studio is making this year.

"We've had students doing summer programs or conferences in Italy, France, Canada and Alaska," Lias said. "This fall, I'm taking two students to the ISCM World Music Days in Vancouver, and one of our graduate students will be studying the entire semester at our partner program in Hobart, Tasmania (Australia).

"There is a vibrant and positive energy in the current group of students," he added, "and some of our recent graduates are winning national and international honors."

One of Henkel's dreams is to create a studio for young and aspiring musicians. He hopes to help young musicians improve their musical technique with their school music – for solo and ensemble, all-region, area and state music auditions, or college audition music. He also hopes to establish an environment in which composers of all ages learn from and collaborate with one another "in a fun and professional environment," he said.

"In the end, I want to embody what Stephen Lias has been saying to me and many other composers who have walked in to his office and classroom: Take Bold Steps!"