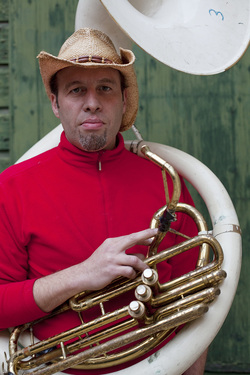 NACOGDOCHES, Texas - The Swingin' Axes and Swingin' Aces jazz bands at Stephen F. Austin State University will present a diverse program when they perform at 7:30 p.m. Friday, April 21, in Cole Concert Hall on the SFA campus.

A highlight of the evening will be an appearance by New York recording artist and composer Jose Davila, who will perform jazz trombone, euphonium and sousaphone with the Swingin' Axes.

"It should be a very fun and eclectic program," said Dr. Deb Scott, professor of trombone in the SFA School of Music and director of the Axes.

A music teacher in the Yonkers Public Schools, Davila has performed with The Ray Charles Orchestra, Steve Lehman, Andrew Hill, Ray Anderson, Charles Mingus Big Band, Marc Anthony, Don Omar, Celia Cruz, Ray Barretto, Spanish Harlem Orchestra, NYC Ballet, American Symphony and Arturo O'Farrill. Most recently, he was a member of Henry Threadgill's "Zooid," which was awarded the 2016 Pulitzer Prize for Music for recorded work on "In for a Penny, In for a Pound." Additionally, he is the 2015 winner of The Annual Bob Stewart Tuba Competition.

Davila will join the Axes on sousaphone on Denis DiBlasio's "Jackson Square," which is a new Orleans based "street beat" sound, Scott explained. He will also perform on trombone with the Axes on Dan Gailey's "In a Big Way Shuffle."

Davila will also conduct several master classes for both jazz bands where he will discuss being a jazz musician in New York and his work with students individually and in groups to develop their free improvisation skills.