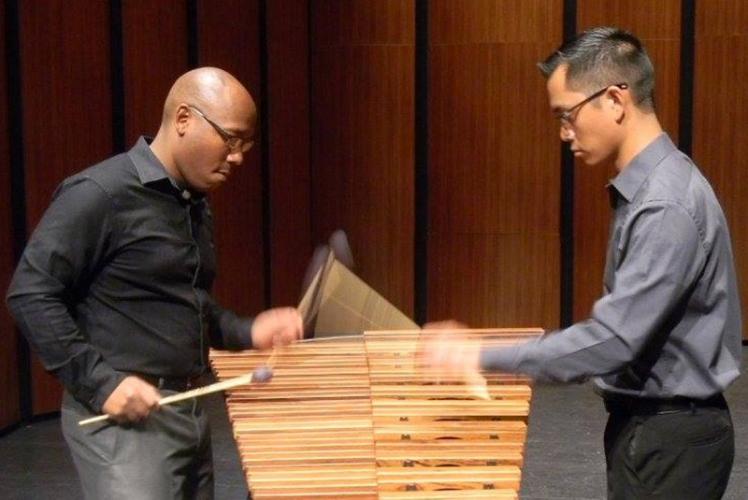 
NACOGDOCHES, Texas – The Omojo Percussion Duo will perform a guest recital at 7:30 p.m. Thursday, Oct. 5, in Cole Concert Hall on the campus of Stephen F. Austin State University as part of the SFA School of Music’s Calliope Concert Series.

Oliver Molina and Joe W. Moore III will perform duo works by living composers. Their goal is to highlight living composers that are composing exciting and interesting works for the percussion duo idiom.

Moore’s four-movement “Secrets We Keep” was inspired by “the secret truths we all have but don’t always share,” the composer said. Each movement is individually titled: Whispering – speaking under your breath; Concealing – hidden agenda; Withholding – half-truths; Revealing – coming to light.

“Ultimately, my goal was to write an intimate work of art that both the performers and the audience would enjoy on stage and in their seats, respectively,” Moore said.

Also featured is Ivan Trevino’s “Hold Fast,” a vibraphone and drum set duo commissioned by a consortium of 28 percussionists and colleges across the U.S.

“The piece is groove-heavy and technically very challenging,” Trevino said, “requiring each player to hold steady and be a foundation for the other.”

Moore is assistant professor of percussion at the University of Texas Rio Grand Valley. Prior, he was director of percussion studies at the University of Texas Brownsville. He has performed with the Rio Bravo Percussion Ensemble during their showcase performance at the 2015 Texas Music Educators Association Convention. He has performed in Ukemerge and Kaunas, Lithuania, as a soloist with the UCF Percussion Ensemble during the Ukemerge Annual Percussion Festival. Moore has also held performing positions at Walt Disney World, as a sub-list member of the Baton Rouge Symphony Orchestra, and as a member of the Rhythm-N-Blue Drum Line for the Orlando Magic NBA team.