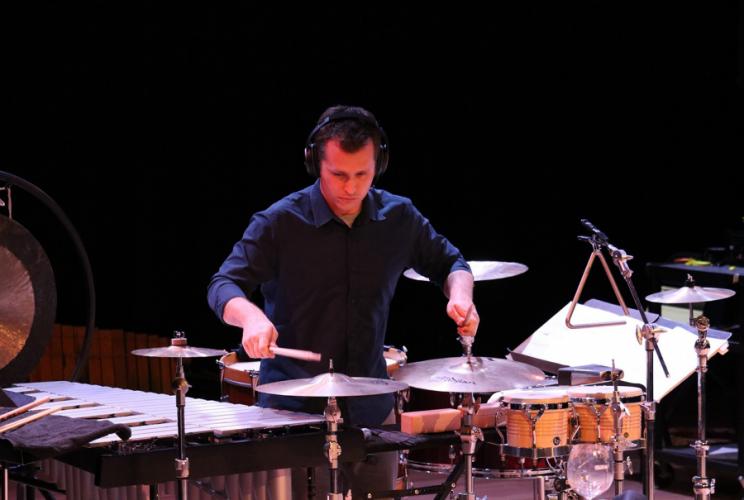 The recital, titled “With Tape,” is a feature of the SFA School of Music’s Calliope Concert Series and will include a program of works by Bob Becker, Paul Bissell and Bruce Hamilton.

“Each of the works on this program is for solo percussion with digital audio accompaniment,” Whyte said.

Becker’s “Lahara” was composed in 1977 after his extensive study of North Indian classical music. He utilized traditional forms and rhythms found within compositions for Indian classical instruments, and he employs them in the realm of pseudo-rudimental western drumming, according to Dr. Brad Meyer, director of percussion studies at SFA.

“Through this progression of forms, Becker attempts to invoke the rhythmic quality and character of table drumming,” Meyer said.

Bissell’s “The Alabados Song” stems from a fading tradition of Hispanic/Catholic communities in the southwest United States.

“As families and entire villages moved in the early 1900s from Mexico and other South American countries into the United States, they created communities in America not serviced by a formal church or clergy due to their geographical isolation,” the composer wrote. “For religious events, these groups had to improvise their own ceremonies, including the ceremony of last rites for the dying.”

“The tape and solo parts interact seamlessly throughout the approximately 15-minute work,” Whyte explained. “Hamilton’s aesthetic makes use of constant cross-rhythmic textures and metric modulations to weave rhythmic and melodic themes together.”