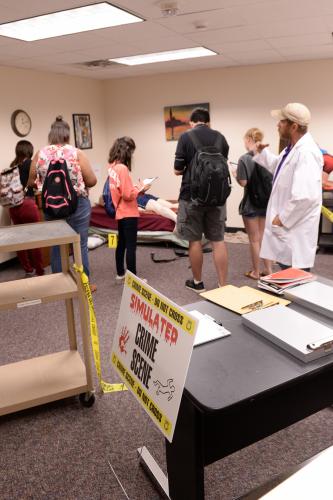 
NACOGDOCHES, Texas — Scanning the crime scene, dozens of high school students search for clues in a mock case. Displaced clothing and picture frames litter the floor. Could this be the sign of a struggle?

During a crime scene investigation simulation with Dr. Milton Hill, SFA assistant professor in the Department of Government, students analyzed a mock crime scene and witnessed firsthand how criminologists, linguists and forensic anthropologists work together.

Dr. Joyce Johnston, director of the Pre-Law Academy and multidisciplinary degrees and French professor at SFA, discussed the program’s many benefits.

“Participants are high school students thinking about what they should study in college. Many ask, ‘What do I need to study to get into law school?’ The answer is liberal arts are extremely valuable to success in law school,” Johnston said. “Liberal arts prepare students to become proficient writers, to be convincing, and to be avid readers and critical thinkers.”

Dr. Donald Gooch, co-director of the Pre-Law Academy and assistant professor of political science in SFA’s Department of Government, explained each year program participants are presented with a different mock case. This year, students worked to solve a mock first-degree murder case in which the state charged fictional character Leslie Andrews with the murder of her husband, Rob. Leslie, however, claimed Rob committed suicide.

Various activities throughout the week were tied to the case. Students worked in groups to present their case at the end of the week during a mock trial in a Nacogdoches courtroom where a judge monitored the competition. The mock trial provided students with an opportunity to role-play the duties of a prosecutor such as calling witnesses and certifying expert witnesses according to court requirements.

Several SFA faculty and staff members in the College of Liberal and Applied Arts contributed to the academy as guest speakers.

“We were fortunate to have many faculty members participate this year. They spoke on the different aspects of how their disciplines intersect and interact with law,” Gooch said. “Students not only are presented the basics of law, but they also see the multifaceted aspects of law interacting with ethics, health, linguistics and more.”

In addition to being introduced to various disciplines, students connected with experts in the field, including those from the Texas State Bar Association and numerous attorneys and judges who presented on various topics such as preparing for law school, a day in the life of an attorney, negotiations and more.