Preview performance of festival play to be presented Tuesday 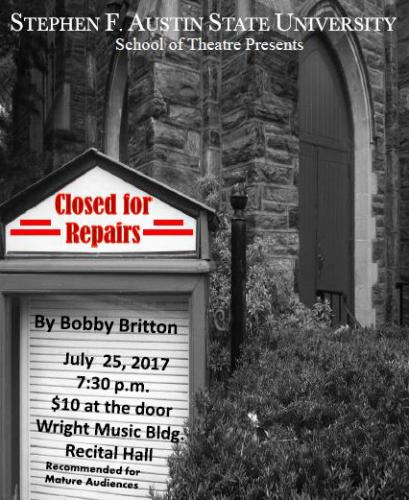 "Closed for Repairs," written by former SFA student Bobby Britton of Angleton, will be presented at 7:30 p.m. in the Music Recital Hall in the Wright Music Building on campus. Admission is $10 at the door, and proceeds will benefit study abroad opportunities for theatre students.

“Closed For Repairs,” written by former SFA student Bobby Britton of Angleton, will be presented at 7:30 p.m. in the Music Recital Hall in the Wright Music Building on campus. Admission is $10 at the door, and proceeds will benefit study abroad opportunities for theatre students.

Britton graduated from SFA in May with a Bachelor of Arts degree and plans to begin graduate studies in the fall at Emerson College in Boston. He describes the selection of his work to be performed at the festival as “a huge honor and a once-in-a-lifetime opportunity.”

Last fall, Britton was working with Angela Bacarisse, professor of design and arts management at SFA, on an independent studies project to write the play. Bacarisse saw the potential in Britton’s writing and encouraged him to work on the script with the idea that it could be a real contender at the Festival Fringe. Having previously attended the festival and toured student productions there, Bacarisse has seen the stories and directing styles that do well.

Britton collaborated with Jackie Rosenfeld, a playwright advisor and theatre instructor at SFA, and Bacarisse, who is now the touring producer of the play, to develop the narrative. Slade Billew, assistant professor of acting and movement in the School of Theatre, was brought in as director. Under his style of directing, which involves more movement-based and physical theatre, the script further evolved and is still changing today.

The festival’s website advertising about the upcoming SFA production describes the play as: “SFA student Bobby Britton’s semi-autobiographical play leads us on a young man’s journey to discover his personal truth in a conservative Texas town. Blending honest dialogue, contemporary songs, and powerful movement, this ensemble-driven piece takes on issues of identity and acceptance in the Bible belt. As the play moves through moments of intense despair and transcendent joy, performers use their bodies and voices to create the world of small town America, exploring the realities of feeling alone in the Lone Star State. The play is intended for mature audiences.”

“The show is about my experience with reparative therapy,” Britton said. “Through therapy sessions, we are able to see flashbacks into this character’s early childhood and some of his relationships with other people that shaped him into who he is today.”

“Personal stories that have both humor and drama do very well at the festival,” Bacarisse said. “I connect Slade’s style of directing with a more European style of performance, as opposed to the American kitchen-sink realism. It will go well with the German and Irish companies and others who will be showing there.”

A group of 19 SFA theatre students and faculty and community members will travel abroad Aug. 1 through 16, and festival performances in Edinburgh are Aug. 4 through 9. The Fringe is considered the largest and most prestigious performing arts festival in the world. SFA theatre students, accompanied by Bacarisse, attended the festival in 2015, and two of those students, seniors Anais Saenz and Jason Trevino, both of Houston, are returning this year.

As a company, the students are responsible for venue rental fees, travel, equipment rental, and publicity and marketing, Bacarisse said. Students house manage, run the lighting and soundboards and stage-manage for their performances.

The students will not see their venue, which is in a Scottish church basement hall, until the day before the show opens, which presents a special challenge, Bacarisse said. But they know it will be the smallest space in which the show has been performed to date.

“That’s one of the things that is good about the experience for students,” Billew said, “in that it more closely mimics the experience of being a touring show. We’ve also talked about working on a new play, and how things will change, as we’re often learning new blocking of new lines very quickly.”

The total cost per student is approximately $5,000, which includes airfare and room and board. Donations are still being accepted to help fund the trip. Various fundraisers, such as Tuesday night’s preview performance, have been conducted to help defray costs.