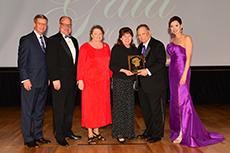 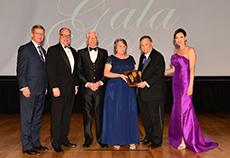 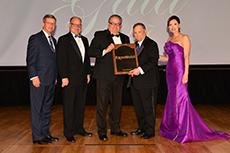 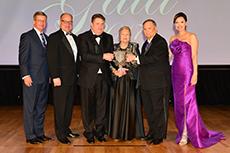 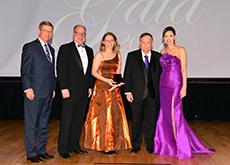 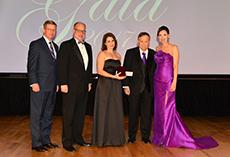 Donors honored this year include Susan and Sam Calomino, Madeline and Alfred Danheim, and ExxonMobil.

“This year’s Gala honorees have significantly impacted the lives of students and the campus community through their generous contributions,” said Jill Still, SFA vice president for university advancement. “We are pleased to recognize their generosity as well as faculty members whose dedication to teaching and research establishes an accomplished university community.”

Greg Williams of Nacogdoches also was recognized at the event, along with SFA faculty members Lauren Selden and Candace Hicks.

Susan and Sam Calomino
The Calominos were inducted into SFA’s Fredonia Society.

Susan is the daughter of Sara “Jane” and Roy Metcalf. Susan and her husband, Sam, have made donations to liberal and applied arts areas, but their most enduring gift was the creation of the Jane Metcalf Memorial Scholarship, which supports students from Panola County pursuing a degree at SFA.

Born in 1922, Jane Metcalf and her husband, Roy, grew up during the Great Depression in Beckville and married during World War II. As the fourth of six daughters born to farmers, Jane understood college was not an option because of costs. Instead, she joined the Women’s Army Corps in 1943, trained at Fort Oglethorpe, Georgia, and was stationed at Grenier Air Force Base in New Hampshire.

Roy was discharged in 1944 from the U.S. Army Air Corps, and the couple settled in Dallas before returning to Beckville. Afforded new educational opportunities through the financial support of the Servicemen’s Readjustment Act of 1944, also known as the G.I. Bill, Jane was one of the first students to enroll at Panola Junior College when it opened in 1947. She was the top student in the first class of 13 graduates in 1948. She continued her studies at East Texas Baptist College and eventually Stephen F. Austin State Teachers College. Jane received a Bachelor of Arts in 1956 and a Master of Arts in 1961 from SFA.

Three of Roy and Jane’s five children received both bachelor’s and master’s degrees from SFA.

The Calominos established the scholarship in Jane’s honor to afford students from her hometown educational opportunities. Preference is given to graduates of Beckville High School and any other high schools located within Panola County.

Alfred and Madeline Danheim
The Danheims were inducted into the Fredonia Society.

The late Alfred and Madeline Danheim donated many times during their lives to the College of Fine Arts before bequeathing a considerable monetary gift. They were most passionate about the School of Music where both received their Bachelor of Arts in 1960 from SFA. Alfred also received his Master of Arts from SFA in 1961.

Alfred was born in Victoria and raised in Alto where he graduated from high school in the early 1940s. After graduating from SFA, Alfred worked as a principal for a school in El Paso and then for Pasadena Independent School District for 30 years where he taught high school history and English. He later became executive director of secondary curriculum for Pasadena ISD.

Madeline was born in Nacogdoches and graduated from Nacogdoches High School in the mid-1940s. She taught first grade in El Paso and in Pasadena.

ExxonMobil
Inducted into the Stephen F. Austin Society, ExxonMobil has made significant contributions to SFA through its matching gift programs. The foundation and the corporation engage in a range of philanthropic activities that advance education with a focus on math and science in the U.S., and promote women as catalysts for economic development. The foundation and corporation also work to combat malaria.

Dr. Nancy Speck is a former SFA vice president for university advancement as well as a Rusche College of Business faculty member. Speck has remained committed to civic service, dedicating her expertise to numerous state and national boards and committees related to education, mental health and economic development.