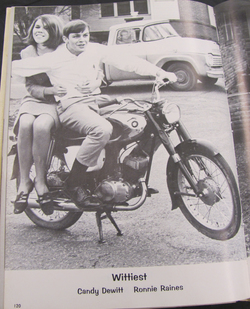 Photo of Ron Raines from the 1968 Nacogdoches High School yearbook.

NACOGDOCHES, Texas - The year was 1968. It was a time of riots, assassinations and protests, "mostly over the Vietnam War," according to Nacogdoches businessman and Realtor David Yates. It was the dawning of the Age of Aquarius with peace, love and harmony, hippies and bra burning.

"What a great time," recalls Yates, who graduated from Nacogdoches High School that year along with fellow classmates Peggy (Wright) Pollock, Sandra (Brock) De La Pena and a young man who would become destined for stardom on the stage - Ron Raines.

A Tony Award nominee for the acclaimed production of "Follies," Raines has had an illustrious international career spanning musical theater, opera, concert and television. Raines is a three-time Emmy and Soap Opera Digest Award nominee for his role as villain Alan Spaulding on CBS's longest running daytime drama "Guiding Light." His list of credits on stage, in concerts and on TV goes on and on. But to Yates, Pollock and De La Pena, he's someone who, despite his great successes, "has not forgotten his old friends."

Raines will return to his hometown to present "Ron Sings Broadway," a benefit concert at 6 p.m. Saturday, Feb. 18, in Mast Hall in downtown Nacogdoches. Proceeds will go toward the Strings Scholarship Fund in the Stephen F. Austin State University School of Music. He will perform with SFA student musicians under the direction of Dr. Gene Moon, director of orchestral activities at SFA.

It's a night and weekend Raines' fellow NHS classmates are looking forward to with great anticipation.

"We have a group going to Longview the night before to see him perform," Pollock said. "My daughter and granddaughter are coming to the performance in Nacogdoches. Ron sang at both my daughters' weddings. My daughter, Margaret, lived in New York for a time, and she was an extra on 'Guiding Light.'"

"I'm just looking forward to spending time talking, eating and seeing other friends who have come in for the event," Yates said. "Ron has an extended group of friends from our class and from other classes who are interested in his career and see him perform when they can. It gives us a great excuse to get together and see some first-class entertainment in New York and other places around the country."

"I have remained in close contact with many of my high school/hometown friends," De La Pena said. "We still talk about our days in Nacogdoches and what a fun time we had growing up there. We all have moved on and have different views on many things, but still have a deep love for one another."

Pollock said she and Raines lost track of each other for a brief time after high school but became reacquainted in the '70s and '80s as his career began to grow.

"I starting going wherever he was performing," she said, adding she has seen him in multiple performances in New York, Houston, the Dallas-Fort Worth area and other locations across the country. When Raines performs in Dallas, Pollock said she often hosts a party for him in her home on the final night of his performance.

Although he was widely known as the villain Spaulding on "Guiding Light," Raines was voted "wittiest" student in the NHS Class of '68.

"He was easily the funniest person in our class," Yates said. "He was doing Jim Carrey shtick when Jim Carrey was in diapers."

"I don't think anyone knew before then that he was that talented," she said. "That was the first time people told him, 'you have a real talent, and you need to do something with it.'"

Over the past 45 years, Raines' classmates have watched their friend perform in many musicals on Broadway, including "Follies" with Bernadette Peters, "Annie," "Chicago," "Newsies," "Show Boat" and others. Raines has soloed with more than 50 major American and international orchestras, including the Boston Pops, the Philly Pops, the BBC Concert Orchestra, the Jerusalem Symphony and the Israel Philharmonic; he has performed at Carnegie Hall, the 92nd Street Y, Tanglewood, the London Palladium, Rainbow and Stars, and Royal Festival Hall. He toured with Debbie Reynolds in "The Unsinkable Molly Brown." He also starred in the SFA performance of "Oklahoma!" in the late 1980s, performing with theatre students.

"Whenever Ron is performing, each of us tries to attend," De La Pena said. "We have such a great time! I have been to NYC many times to see him perform. I have also traveled to California a few times and to all Texas performances. It's hard to keep up with him because of his busy schedule, but we do text and email regularly."

"Ron has been successful not only because he has a great talent, but also because he put in hard work training his voice and honing his skill as an actor," Yates said. "Most of all, he had the 'guts' to go out there and do it, and he never gave up.

"I and his other friends are very proud of him," he said, "and when he goes on stage, I think we feel like a little part of us is up there performing, too. I'm always a little nervous when he goes on stage. I'm afraid he (we) will forget our lines. I've never seen it happen, though. He's a pro." 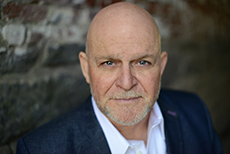 "It's the best; it's where it all began," he said. "I get to see my family, my friends … people I've known all my life who influenced me in ways they don't even know. It's always a wonderful time."

His next hometown performance will be at 6 p.m. Saturday, Feb. 18, in Mast Hall when the Stephen F. Austin State University School of Music and Friends of Music present "Ron Sings Broadway" as a fundraiser for the SFA Strings Scholarship. He will perform with SFA student musicians under the direction of Dr. Gene Moon, director of orchestral activities at SFA.

Raines said he appreciated the opportunity to support the School of Music and the Friends of Music in this manner.

"The arts are the soul of civilization as far as I am concerned," he said in a telephone interview from Salt Lake City where he was scheduled to perform with the Utah Symphony. "Music has been my life. I cannot imagine going through life without music.

"I've been one who has been a steward in serving music in the way that I could," he said, "but there are many who serve in the way they can - by helping to fund the next generation of young artists and by supporting symphonies and cultural events in their communities. I'm thrilled the Friends of Music are very active and doing these things and presenting wonderful cultural events for Nacogdoches."

Raines will perform with the Longview Symphony on Friday night prior to his Nacogdoches performance Saturday night. A number of friends and family members are planning to attend the Longview performance, as well.

"I have tons of relatives in East Texas who will be coming," he said, "so I am looking forward to performing with the full symphony there. I'll be doing the wonderful great tunes of Broadway and the American classical songbook. It's all feel-good romance and love.

"I look forward to sharing that with the hometown folks Saturday night," he said, "and presenting the next generation of talent that SFA has in these incredibly talented young people who are planning to make their mark in music in whatever form that takes. It's very exciting."