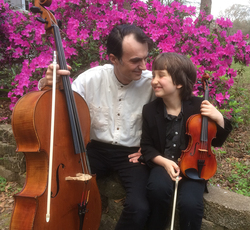 Dr. Evgeni Raychev, cello instructor in the SFA School of Music, will perform with his son, Jonah, in a recital titled "Musical Foray" at 7:30 p.m. Thursday, March 23, in Cole Concert Hall.

The recital, titled "Musical Foray," takes the listener into the world of the great composer Gabriel Fauré with other selections by Carl Maria von Weber, J.S. Bach and Joseph Haydn.

"The recital will focus on the works for cello and piano by the French Romantic composer Gabriel Fauré, whose musical style influenced many 20th-century composers," Raychev said. "His works often have descriptive titles and are very picturesque in character. They have unique figurative language, so typical of Fauré, which takes us on a special journey through various mental images."

Although most of these pieces are short and programmatic, Fauré's Sonata for cello and piano is larger in scope, Raychev said. Other composers and styles featured on the program provide contrast to Fauré's music.

"Weber's Adagio and Rondo, originally for harmonium and orchestra, is an interesting showpiece transcribed by the famous cellist, Gregor Piatigorsky," Raychev said.

Raychev will be joined by his son, Jonah, in the first movement of Bach's well-known concerto for two violins. The concert also features the third movement of the Haydn Cello Concerto in C major, which Raychev describes as "an exciting showpiece for the soloist, fully exploring the range and technique of the cello." The last two selections will be accompanied by string quartet.

Cello instructor in the SFA School of Music, Raychev is the co-founder of the Piney Woods Camerata and Piney Woods Youth Orchestra and founding member of Alazan Piano Trio. A new endeavor is the Cello Club in which cello enthusiasts of all ages are prepared online to gather together for a concert at SFA.

Wong is principal organist at St. Martha Catholic Church in Kingwood. She completed a Master's Degree in Piano Performance at SFA while serving as full-time graduate assistant in piano, accompanying student ensembles.