The Rusk Family Letters Collection at SFA Opens to Public 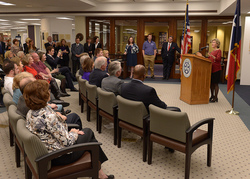 NACOGDOCHES, Texas - Dignitaries and special guests, including former U.S. Sen. Kay Bailey Hutchison, members of Stephen F. Austin State University's Board of Regents and members of the Rusk family attended a reception Monday at SFA announcing the public opening of The Rusk Family Letters, a new collection of documents from historical figures Thomas J. Rusk and his brother, David Rusk.

Last fall, SFA's Board of Regents approved the purchase of the collection, which contains about 1,000 items. The Rusk family donated approximately 600 additional items.

Thomas J. Rusk was a political and military leader of the Republic of Texas who served as its first secretary of war and as a general in the Battle of San Jacinto. He was later a U.S. politician and served as a senator from Texas.

Comprising the majority of the collection are documents addressed to David Rusk, who served as Nacogdoches County sheriff and a tax collector during the Republic period. The materials help tell the story of Nacogdoches as well as the Republic of Texas and are an intimate picture of the Rusk family's private lives and public service.

The collection is housed inside the East Texas Research Center, located on the second floor of Steen Library on SFA's campus, and is available for viewing weekdays from 9 a.m. to 5 p.m.