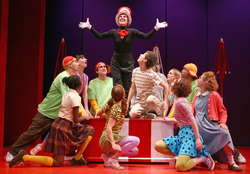 The children's favorite musical "Seussical" comes to the SFA campus in two performances at 9:30 a.m. and 12:30 p.m. Friday, Feb. 10, as part of the Children's Performing Arts Series.

Presented by Theatreworks USA, the play is based on several Dr. Seuss stories, including "Horton Hears a Who," "Horton Hatches the Egg" and "Gertrude McFuzz."

"The Cat in the Hat is host as Dr. Seuss's beloved characters find themselves intertwined in an incredible crazy-quilt adventure in which the power of imagination saves the day," said Diane Peterson, Fine Arts Box Office manager and director of the series.

The play is adapted especially for young audiences from the Broadway version of "Seussical." It is recommended for children in kindergarten through fifth grade.

Written by Broadway veterans Lynn Ahrens and Stephen Flaherty, the production features 10 actors and enhanced production values, and it is Theatreworks' biggest show ever, Peterson said.

Presented by the SFA College of Fine Arts, the Children's Performing Arts Series annually features five shows designed to entertain, educate and engage young audiences of all ages, according to Peterson. Study guides provide suggestions for pre- and post-performance activities and discussions for teachers to use in the classroom.

Other upcoming CPAS performances include "The Little Mermaid" on Tuesday, March 7; and Super Scientific Circus on Thursday, May 11.