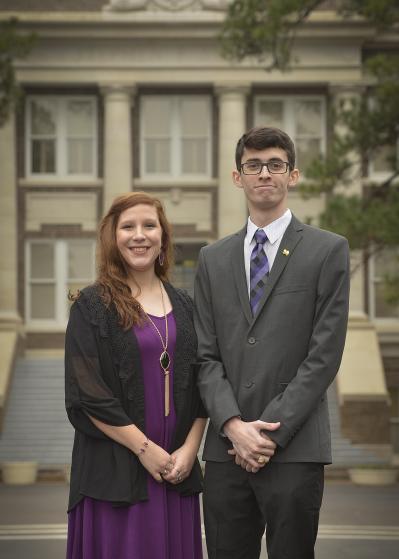 
NACOGDOCHES, Texas — The Stephen F. Austin State University Alumni Association announced that Zachary McSwain of Spring and Morgan Pulliam of Dallas have been selected as recipients of the 2017 Mr. and Miss SFA Award.

The Mr. SFA Award was established in honor of the late Stan McKewen, a 1934 SFA graduate. The Arnodean Covin Miss SFA Award honors the late alumna who was named Miss SFA in 1940, 1941 and 1942.

A 2013 graduate of Klein Collins High School, McSwain, who received the Stan McKewen Mr. SFA Award, is a senior history major and the son of Randall and Susette McSwain.

“Zach has demonstrated exceptional leadership in his contributions to the university, its students and our community,” Lacey Folsom, associate director of student engagement at SFA, said. “He truly exemplifies the Lumberjack spirit, tirelessly giving his time and energy to show others the value of an SFA education. He is an excellent role model for all students.”

McSwain serves as secretary of the SFA Traditions Council, co-founder and former president of the SFA League of Legends Club, and is a member of the History Club. He also has made the College of Liberal and Applied Arts Dean’s List.

Additionally, McSwain has volunteered with The Big Event and works as a student technician for SFA’s Technical Support Center.

“SFA has shown me more than just the college experience. I discovered that this university is rich in culture and tradition. Through all these things, I have become more than a student. I have become a true Lumberjack,” McSwain said.

Pulliam, recipient of the Arnodean Covin Miss SFA Award, is a 2013 graduate of Newman Smith High School. She is a senior psychology major and the daughter of Joy Pulliam. She also is a first-generation college student.

“Without SFA, I do not know where I would be,” Pulliam said. “I have met so many people and made so many connections, which wouldn’t have happened without my campus involvement. SFA is in my heart and soul. I eat, sleep and bleed purple.”

Pulliam is active in many community and SFA-related clubs, organizations and associations, including serving as student director of the Purple Haze Association, student instructor for SFA 101 and Jack Camp counselor.

She has served as president and vice president of New Opportunities for Romanian Orphan Children. She also has served as an SFA Orientation leader, and volunteered with the Nacogdoches Animal Shelter, The Big Event and SFA’s food pantry.

“Morgan is welcoming, approachable, personable, a leader and a true SFA Lumberjack,” said Dr. Hollie G. Smith, assistant dean of student affairs for programs at SFA. “The list of organizations she is involved in as a member and/or leader is something to admire. She takes on each new task with a lens of going above and beyond.”

SFA’s Alumni Association awards the Mr. and Miss SFA titles annually to exemplary students who represent and promote the university. Recipients are selected based on their scholarship, participation and leadership in academic and co-curricular activities, and citizenship, service and loyalty to the university. A committee of faculty and staff members, community leaders and alumni makes the selections.