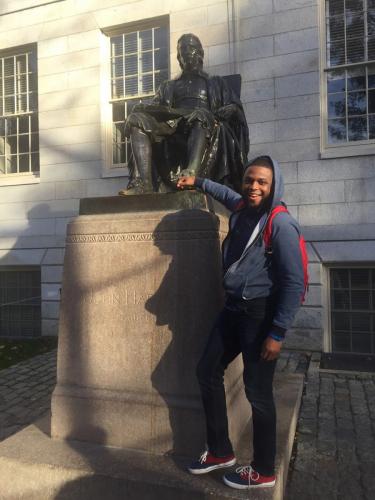 Perkins is an Urban Scholar Fellow enrolled in the school’s Technology, Innovation and Education master’s program where his studies focus on learning design, entrepreneurship and emerging technology in K-12 urban education.

“I chose Harvard because of the intellectual and demographic diversity of the faculty and students,” he said. “I was drawn to my particular program because it is one of the few educational technology programs in the country with an interdisciplinary approach to education that spans several industries including the K-12 educational sector. The flexibility was particularly interesting because it allows me to combine my interest in the business of education technology and K-12 urban education innovation through classes across the various schools at Harvard, as well as MIT.”

Perkins, a 2014 graduate, has spent the past several years working in San Antonio as a math and English language arts teacher at KIPP Un Mundo Dual Language Academy through Teach For America and as a Data Analyst Fellow at the P16Plus Council of Greater Bexar County.

He has also volunteered with Amnesty International USA as a recruiter for the AIUSA board of directors and with San Antonio RISE, an educational organization focused on equity in urban public schools, where he participated in the Diversity in Public Leadership Series in Los Angeles, California, and the National Organizing Workshop in Chicago, Illinois.

Perkins believes his time at SFA played an integral role in his development as a scholar and a leader.

“At SFA, I majored in art history with a second major in Spanish,” he said. “Since graduation, I have come to fully realize and appreciate the benefits of the liberal arts education I received at SFA.”

For example, through Dr. David Lewis’ and Dr. Jill Carrington’s art history courses at SFA, Perkins said he developed writing and critical analysis skills that have proved beneficial at Harvard. Through Dr. Court Carney’s African American history course in the Department of History, he developed a keen awareness of the history of racism in the U.S., and the subsequent fight for racial equality that inspired him to apply for Teach For America after graduation.

“In conjunction with my academics, I was also involved in many student organizations, such as Omicron Delta Kappa, Alpha Phi Omega, Amnesty International and Pride Nac, to name a few,” he said. “In these organizations, I had the opportunity to practice my leadership abilities, as well as contribute to the broader Nacogdoches community through community service. These experiences were essential in the development of who I am today and still bring back fond memories.”

After graduation, Perkins plans to stay in the Greater Boston Area and take advantage of the growing technology landscape to pursue opportunities in learning design in the education technology sector. Specifically, he hopes to work within companies such as Google, Pearson or Khan Academy to design and implement organizational learning opportunities through blended learning environments.

“Long-term, I hope to start my own 503(c) non-profit organization that focuses on teaching underprivileged children 21st century skills such as programming, as well as creating mentorship programs with major industry leaders in the technology sector,” he said. “Above all else, I want to provide children with the opportunity to be their very best selves regardless of what communities they come from.”