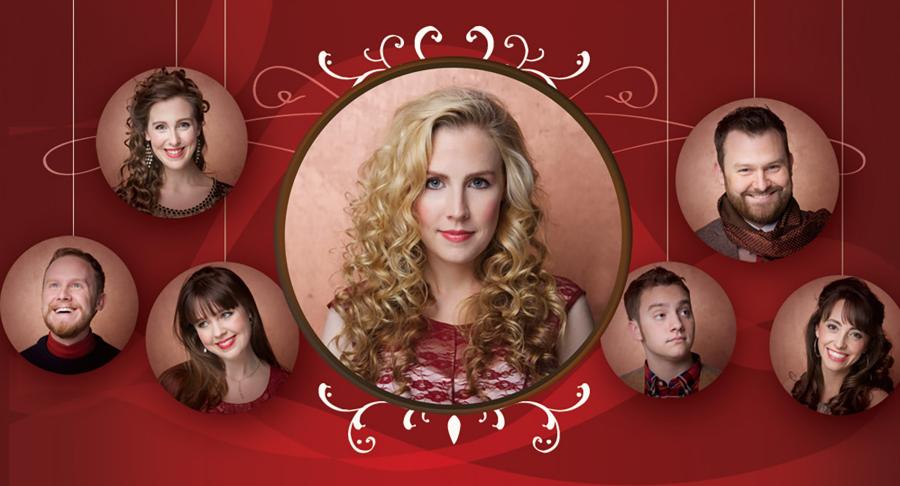 “Christmas With the Annie Moses Band” is among the featured performances in the 2017-18 University Series offered by the SFA College of Fine Arts.

“We wanted to offer, as much as possible, the full range of performance possibilities in this year’s series,” said Scott Shattuck, associate dean of the college and director of the series.  “So we found superb dance and theatre as well as the best of classical and popular music, and a sensational cross-over group that will bridge many styles in their thrilling performance of our favorite Christmas songs.”

An Encore Event that is separate from the University Series, yet equally as exciting, is a pair of performances of the Moscow Ballet’s Great Russian Nutcracker as the international troupe celebrates its 25th year of touring North America. Performances are scheduled for Thursday and Friday nights, Nov. 16 and 17, and are sponsored in part by Lehmann Eye Center.

“This popular ballet ensemble performed in 2009 before a sold-out Turner Auditorium, and this year’s milestone tour will truly launch the holiday season in Nacogdoches,” Shattuck said. “Promising repeated rave reviews, The Great Russian Nutcracker performances will likely once again see sell-out dates, so get your tickets early!”

A younger sibling to the Paul Taylor Dance Company, Taylor 2 brings the work of the modern dance world’s leading choreographer to life. This spectacularly warm, gracious and daring dance company yields a more intimate creation that delivers the same emotional knockout that Paul Taylor has become known for worldwide. Critics and audiences cheer as Taylor 2 introduces the athleticism, humor and range of emotions for which his work is famous. The Sept. 14 performance is sponsored in part by Cataract, Glaucoma & Retina Consultants of East Texas/Benchmark Optical/Medical Arts Surgery Center.

Experience the beauty of “Christmas with the Annie Moses Band” as the acclaimed ensemble performs stunning arrangements of holiday favorites, bringing Juilliard-honed chops to Nashville-styled music-making in a captivating blend of popular and classical arrangements. The band's innovative sound has delighted audiences from jazz aficionados to bluegrass buffs on PBS and on stages as diverse as Carnegie Hall and the Grand Ole Opry. From "Carol of the Bells" to "O Holy Night," this is a holiday journey audiences are sure to love. The performance is Tuesday night, Dec. 12, and is sponsored in part by Nacogdoches Medical Center.

Called “the world’s reigning male chorus” by The New Yorker magazine, the San Francisco-based, Grammy award-winning ensemble Chanticleer will perform Friday, Jan. 19. Known around the globe as “an orchestra of voices,” the a cappella choir is famous for its seamless blend of its 12 male voices ranging from soprano to bass and its original interpretations of vocal literature, from Renaissance to jazz and from gospel to pop. The performance is sponsored in part by BancorpSouth.

L.A. Theatre Works and its producing director Susan Albert Loewenberg will present “The Mountaintop” on Saturday, Feb. 3. In this award-winning Broadway play, author Katori Hall imagines a provocative conversation between Dr. Martin Luther King Jr. and a mysteriously shrewd motel maid on the night before King’s death. Shortly after saying, in his final speech, "I've been to the mountaintop," King finds himself in a poetic and stormy clash of perspectives as performed by the acclaimed radio theatre company. The play contains mature language and controversial themes. “The Mountaintop” is presented in association with the SFA Office of Multicultural Affairs.

Heralded by CMT Edge as "one of the most promising bands on the bluegrass scene," the Nashville-based group The Barefoot Movement will perform Thursday, March 8. When this up-and-coming, youthful quartet of superb musicians romps through pop-infused “newgrass” medleys and country-flavored ballads, you can expect an evening of music with something for everyone. The performance is sponsored in part by Commercial Bank of Texas.

"These are fantastic prices for entertainment of this quality," said Diane Peterson, Fine Arts Box Office manager. "Season tickets provide a 25-percent savings over single tickets, and patrons can have their same seat throughout the season.

Single-event ticket purchases for the University Series, The Nutcracker or any of the other performances presented through the College of Fine Arts can be made beginning Monday, Aug. 14.

Nutcracker tickets are $45 for Section A seating; $36 for Section B seating; and $20 for Section C seating. Discounts are available for seniors, students, children and SFA faculty and staff members.

All performances are at 7:30 p.m. in W.M. Turner Auditorium in the Griffith Fine Arts Building, 2222 Alumni Drive, on the SFA campus.