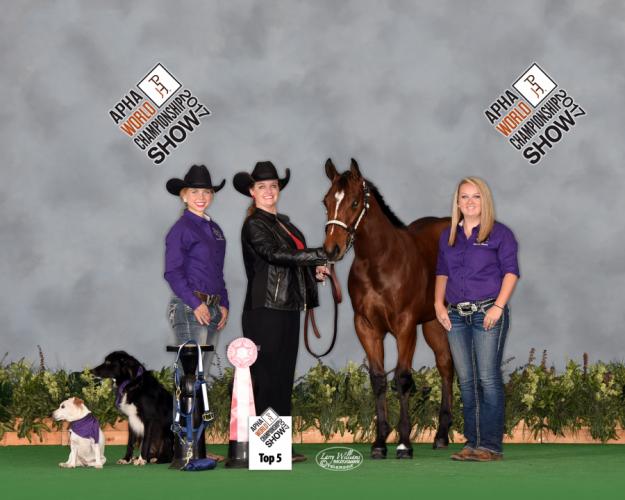 “The success of this world show, coupled with the success of the Palomino Horse Breeders Association World Show when I showed Missbehavenhollywood, another SFA-owned horse, puts us on the map as not only contenders in the show pen, but also as breeders of world show-quality horses,” said Michaelle Coker, SFA equine center supervisor. “This will only boost our program and help us reach our goals of a winning show team and a viable breeding program.”

The colts were born this winter at SFA’s Walter C. Todd Agricultural Research Center and are a significant milestone in the growth of the university’s equine program that received a donation of seven broodmares in 2015 from Trudy Day and Nancy Batzloff.

In addition to Make Me Move and Remember the Name, SFA-born Smokn Lopin was shown by a representative of Hat Creek Ranch and placed fourth in Open Ranch Riding and eighth in Open Ranch Trail Riding.

Coker said she believes this is the first time that a university has shown a horse they bred at the American Paint Horse Association World Championship.

Students are an integral component of the expanding program and play key roles in every aspect of foaling, training and showing.

Kelsey Chatigny and Sarah Bone, both senior animal science majors, were enrolled in the equine reproduction course that monitored the gestation and birth of both colts. They continued their direct involvement through an independent study course designed to prepare students to work in the equine industry. With assistance from Coker, Bone and Chatigny fed, groomed, trained and exercised the colts six days a week in preparation for the world show.

“We spent the entire summer at the equine center at all times of the day,” Chatigny said. “We learned a lot of time management and organizational skills.”

Their steadfast care undoubtedly paid off as the two colts were led through a litany of inspections from judges who examined everything from the colts’ teeth to the manner in which they move.

To learn more about the SFA equine program, contact Michaelle Coker at cokermk@sfasu.edu.