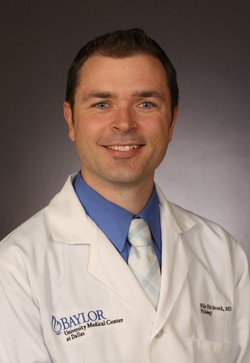 Hitchcock received his Master of Science in biology from SFA and graduated from the University of Texas Southwestern Medical School.

He currently serves as a Hematology Fellow at Baylor University Medical Center in Dallas and will transition later this year to a position as a pathologist at Eastern Connecticut Pathology Consultants in Hartford, Connecticut.

"I want to highlight the progress we have made with targeted therapy and immunotherapy and introduce the audience to the technology and testing that occurs in that process," Hitchcock said. "I also want to highlight all the career opportunities that are available in the diagnostic spectrum of the medical field: pathologists, cytogeneticists, flow cytometry analysts, histotechnologists and medical technologists."

The J.H. Burr Jr. Distinguished Lecture in Biology is a speaker series endowed in honor of Professor J.H. Burr, who earned his doctoral degree in histology from Rice University and taught at SFA from 1951 to 1986. The series hosts speakers who discuss topics at the forefront of biological research.