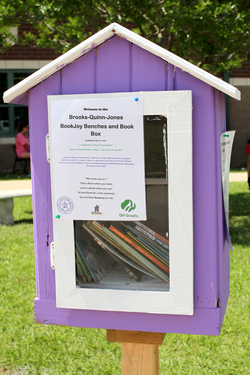 "We've been working with BQJ on several student-driven projects the past few semesters," said Dr. Lauren Burrow, SFA assistant professor of elementary education. "After talking with BQJ staff members about how SFA students can be more involved, we discovered the school's interest in literacy initiatives. They had heard about mini-libraries and asked us if we could do something similar. We said, 'Sure,' and went bigger with it."

The mini-library, known as the Brooks-Quinn-Jones BookJoy Benches and Book Box, was a collaborative project between Burrow, SFA students and a local Girl Scout, Maya Tanner, who made the library her bronze project and constructed the book box.

The book box resembles a large mailbox and is stocked with a variety of children's books. SFA students collected more than 500 books for the mini-library. Several benches also were secured and placed on the front lawn of BQJ to create an inviting reading area.

"The point is for people to come take a book, read it and keep it as long as they want. You could keep it in your home forever if you wanted. That's the great thing about it - there are no due dates, fines or fees," Burrow said.

Many of Burrow's students have been working with BQJ elementary students on a plethora of projects, all of which culminated with the recent grand opening of the mini-library. For example, SFA students researched lesser-known historical figures and wrote original children's books about the figures to share with the elementary students. BQJ students helped illustrate the books.

Additionally, SFA students taught BQJ children poetry and had them write their own poems, which also were published in a book. Both of these books were some of the first to be placed in the mini-library.

During the library's grand opening, SFA students hosted a BookJoy event with games, crafts and activities for BQJ students.

"BookJoy was a great event because it gave us ideas on what a lesson could be and how we could incorporate learning into different activities," said Ben Dickey, Austin junior and early childhood through sixth grade education major. "Also, the library is a great resource for students. A lot of students hang out here during the summer to play on the playground, and now they will be able to read, too."

This project was funded in part by Burrow's service learning mini-grant.