SFA Friends of Music to honor Wright at Extravaganza 30 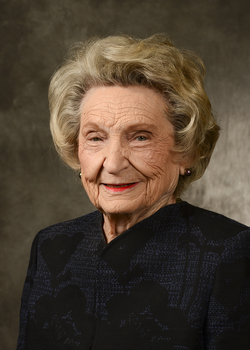 This year's Extravaganza, "Golden Stars of SFA," celebrates the 30th anniversary of the gala and fundraiser, which features gourmet dining, performances by student soloists and ensembles, and the presentation of student awards in an exciting evening of music, according to Dr. Gary Wurtz, director of the SFA School of Music.

"There is no better way to experience a cross section of what the SFA School of Music has to offer than at our annual Extravaganza," Wurtz said. "While enjoying a good meal, those in attendance hear performances by the top choir, band, orchestra, jazz band, student recitalists, opera performers, and more. Our fantastic students provide both dinner music and a dance to end the evening. It is really a lot of fun!"

As is tradition with Extravaganza, the music faculty has selected an outstanding music graduate to honor, and this year's recipient is Dr. Peggy Wright.

"Mrs. Wright is a stalwart of the Nacogdoches community and an avid supporter of all things SFA," Wurtz said, "but many people may not realize that she has a bachelor's degree in music from SFA, as well. This year, the committee voted unanimously that Mrs. Wright must be our honoree, and, in fact, they all agreed that it has been an oversight to not award this to her much sooner! Mrs. Wright's support of the School of Music over the years has been overwhelming, and we are excited to have this opportunity to honor her in this way."

Wright's work on behalf of SFA includes her service as president of the SFA Alumni Association Board of Directors from 1974-75; member of the SFA Board of Regents from 1973-83 and 1987-93, serving as chairman of the board for four years; member of the SFASU Foundation Board of Trustees, serving as secretary/treasurer from 1987-2006 and chairman from 1985-87; and member of Friends of Music and the Dean's Circle. She was named the SFA Distinguished Alumna in 1985 and Nacogdoches Woman of the Year in 1989. In 1997, the SFA Board of Regents selected her as the second recipient of an honorary university doctorate.

Along with her late husband Tom, Wright's philanthropy to SFA has been extensive, including the creation of the Wedgeworth-Wright Endowment for the Arts. In recognition of the Wrights' longstanding commitment and love for SFA, the music building was named the Tom and Peggy Wright Music Building in 1999. She also has been highly involved in the Nacogdoches community, serving in numerous leadership roles, including president of the Cum Concilio Club, regent for the Nacogdoches Chapter Daughters of the American Revolution, and member of the Texas Council of Economic Education Board of Directors, Citizens 1st Bank Board of Directors, Heritage Club, Dallas Woman's Club and National Society of Colonial Dames of America. In 2004, the Wrights shared the Nacogdoches County Chamber of Commerce's Citizens of the Year award. The Wrights are longtime members of Westminster Presbyterian Church, and they have two daughters, Kitty Dippel of Brenham and Peggy Pollock of Dallas, six grandchildren and 16 great grandchildren.

"We want to invite everyone to come and celebrate this 30th Extravaganza with us," Melinda Rohrer said.