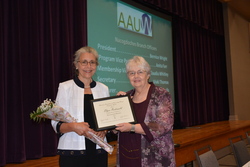 Elyce Rodewald, education coordinator at SFA Gardens, was one of six local women honored for their service to the community during the American Association of University Women's 2017 Woman of the Year Awards Banquet. Rodewald, left, received a plaque and bouquet from Bernice Wright, president of the Nacogdoches chapter of the AAUW.

Elyce Rodewald, education coordinator for Stephen F. Austin State University's SFA Gardens, was one of six women to receive a service award from the Nacogdoches chapter of the American Association of University Women during the 2017 Woman of the Year Awards Banquet held on March 28.

Since joining SFA Gardens in 2001, Rodewald has reached thousands of children and adults through after school and special programming aimed at introducing the community to the natural world. This diverse programming includes garden seminars, lectures, tours, and special children's programming such as Nacogdoches Naturally and Bugs, Bees, Butterflies and Blossoms, a cooperative program with the SFA's James I. Perkins College of Education.

"We have honored really tremendous women throughout the years we have done this," said Bernice Wright, president of the Nacogdoches Chapter of the AAUW.

Wright explained that recipients from varying fields are chosen following a nomination and review process.

The AAUW is a national organization founded in 1881 to advance equity for woman and girls through advocacy, education, philanthropy and research.