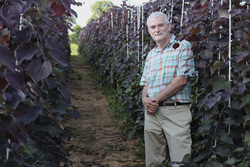 Born and raised in York County, Pennsylvania, Werner gardened at an early age and grew up exploring the fields and woodlots of South Central Pennsylvania. These interests led him to complete a bachelor's degree at Pennsylvania State University and then master's and doctoral degrees at Michigan State University with an emphasis in plant breeding and genetics.

Werner was hired at North Carolina State University in 1979 to teach and conduct research in peach breeding and genetics. His efforts in this area have led to the development of numerous peach cultivars that are widely grown in the Southeastern U.S. In 1998, his research efforts shifted to ornamental plant breeding and genetics, focusing on Cercis (redbud) and Buddleja (butterfly bush).

In 2013, the American Horticulture Society awarded him the Luther Burbank Award for extraordinary achievement in plant breeding. He has twice received the North Carolina State University Outstanding Teacher Award.

An avid gardener, Werner's home landscape includes a 2,000-square-foot herbaceous perennial border and a diverse collection of woody shrubs and trees. He has been a long-time friend of the JC Raulston Arboretum and a member of the American Society of Horticultural Science. He was named a fellow of ASHS in 2011.