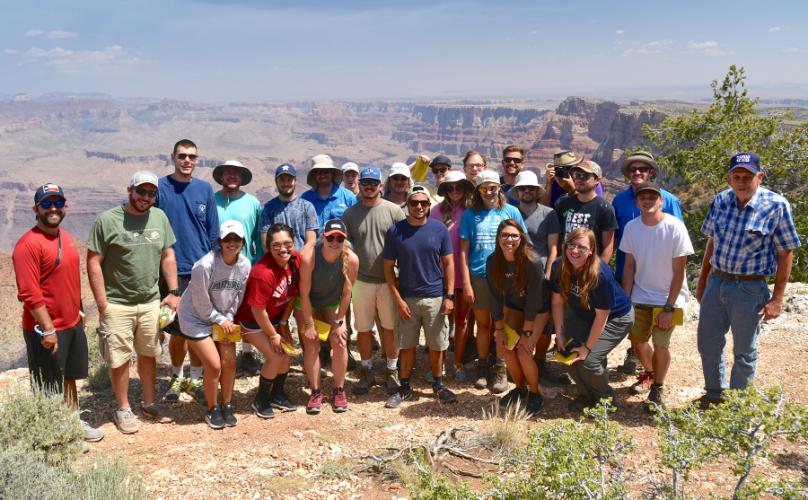 The field course was designed to help students bridge the gap between classroom lectures and real-world geology. SFA's field camp is the capstone course for its geology majors. Students enrolled in the course complete a series of mapping projects in areas where rocks have been folded and faulted by ancient plate movements. SFA's Geology Field Camp has been conducted almost every summer for more than 40 years.

"For geology students, the American Southwest is the perfect teaching lab because the rocks are easy to see. They're not covered with grass and trees like they are in East Texas," said Dr. Chris Barker, SFA associate professor and director of the Geology Field Camp.

"Field camp gives students a valuable opportunity to put their classroom learning to practical use in real-world situations," Barker said. "We always see a great amount of growth in the students’ ability to understand geology and in their confidence as field camp progresses."

Throughout the six-week period, the group camps in the wilderness or resides in dormitories along the way.

"We head west because there are countless acres of federal lands with easy access, so we can do our mapping projects there,” Barker said. “Higher altitudes and lower humidity also result in more moderate summer heat.”

Traveling west also gives students an opportunity to see some of the geologic wonders of the world, including the Grand Canyon. Barker said for geologists, the Grand Canyon is a window into the history of North America. As the canyon was cut by downward erosion of the Colorado River, it uncovered layer after layer of ancient rock. Its great depth provides a glimpse into the early history of the continent.

SFA's field camp not only benefits SFA geology majors, but it also attracts students from other universities across the country.

"Each year, we have a few openings for university students to attend the camp from outside SFA,” Barker said. “The response has been remarkable. We have been swamped with applications from university students who attend schools that do not offer a field camp. We have good word-of-mouth for being a field camp that focuses on the basics of field mapping and also one that travels to a variety of locations, so students get to see different geologic features."

The students on the trip also visited several other national parks along their route, including Carlsbad Caverns and Zion, Arches and Bryce canyons, all of which are not only scenic but also geologically unique.