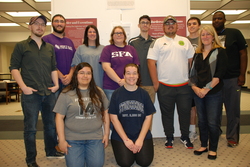 Stephen F. Austin State University students enrolled in Associate Professor Perky Beisel's History 308: Introduction to Public History course stand in front of a preliminary exhibit on crime and punishment commissioned by the Stone Fort Museum. Students researched the history of executions, trials, slavery and other topics in and around Nacogdoches County. The display will be on the second floor of Steen Library for the next four to six weeks.

Carolyn Spears, curator of the Stone Fort Museum, said that she and Beisel began discussing the collaboration during the fall semester. "Perky is a member of the Education Programming Committee, which was formed to develop processes for long-term exhibit planning and collaboration with academic departments," Spears said. "When I mentioned that we were beginning to develop a new exhibit about crime and punishment in East Texas, we both saw an opportunity to collaborate."

Beisel worked to develop her introductory course around the framework of the museum's potential exhibit. "The key to public history is that historic research needs to be at the request of the public or designed for the public," Beisel said. "We used the Stone Fort Museum's upcoming exhibit to provide a platform to teach students how to convert 'traditional' research into label text and visual and descriptive materials found in museum displays."

Students also covered the history of slavery in Texas, noting the case of The State of Texas v. Raiford Fulgham, a slave owner who was tried and convicted for the mistreatment of one of his slaves, and presented information about convict leasing, a Reconstruction-era practice where private citizens and companies could pay to have chain gangs work in agricultural and infrastructure projects without pay.

"When their work on the panels was beginning, before class they held lively discussions about murders, gambling, prostitution, vice, slavery and executions," Beisel said. "The students learned that local examples provide a way to connect with larger themes in American history."

After the individual students conducted their research, Beisel paired students to produce visual displays to highlight aspects of their research. Beisel said that these displays are the first step in creating the Stone Fort Museum's eventual exhibit. The posters feature images from Nacogdoches city and county documents, as well as the students' initial label text.

Zach McSwain, a senior history major from Houston, said that the project forced students to conduct in-depth research. "We had to use local historical archives at the East Texas Research Center to find small historical events that hint at the larger historical significance throughout the United States. It was like trying to find a diamond in the rough," McSwain said. "We relied on primary sources and conducted advanced research from archival county and district court records."

The students' displays will be located on the second floor of Steen Library in front of the ETRC for the next four to six weeks. Visitors are encouraged to leave Post-It notes on the display board to help provide feedback about the theme's exhibit. Spears urges visitors who have materials or artifacts related to the exhibit to contact her.

The Stone Fort Museum plans to showcase the final exhibit in late 2018 or early 2019.