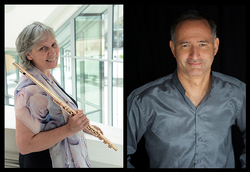 Professor of flute at Florida State University since 2001, Amsler spent 20 years of orchestral playing in Switzerland and serving on the faculty of the Vorarlberg State Conservatory of Music in Feldkirch, Austria. As a pioneer on authentic interpretation of Baroque music on modern flute and an advocate of new music, including for piccolo, alto and bass flute, she enjoys a worldwide career as a performer and teacher.

Ad-El was born in Israel and graduated from the Royal Conservatory of the Hague. He frequents some of the world's most prestigious venues, such as Carnegie Hall, Wigmore Hall, Suntury of Tokyo, Brugge festival, Bachfest of Leipzig and LG Centre of Seoul. Ad-El is a member of Philharmonic Stradivari Soloists Berlin, il Gardellino and The Dorian Consort.

Both artists will present master classes in addition to their concert, and Amsler will also teach a dynamic integration (body awareness) class.