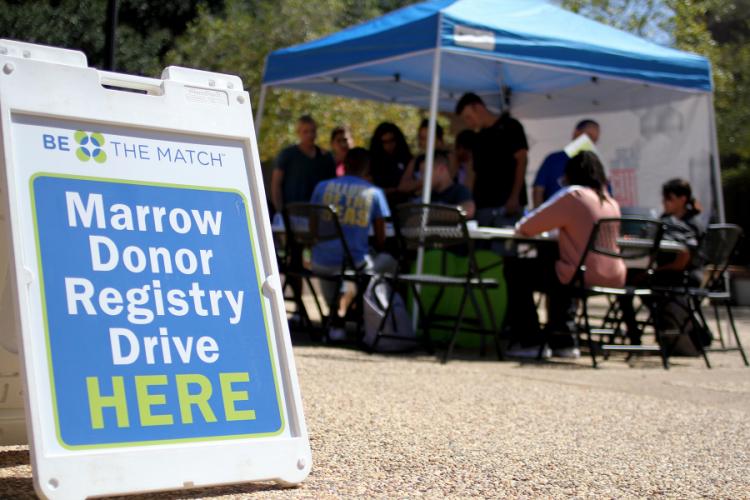 Approximately 100 SFA students in courses taught by Patty Berthot, SFA lecturer in the Department of Kinesiology and Health Science, and many student-athletes worked to promote the drive and encourage others to become bone marrow donors.

“This program is really important. I’m biased because one of my best friends had a bone marrow transplant in the 1990s,” Berthot said. “It’s great to see students working to help others.”

During a four-day period, students set up tents in front of the Baker Pattillo Student Center and near the statue of Stephen F. Austin to spread awareness and sign up donors. As a prelude to the Battle of the Piney Woods football game, the effort also served as a competition between SFA and Sam Houston State University to see which institution could sign up the most people for the registry. SFA had 257 people sign up to become donors, and students logged more than 186 volunteer hours.

“We are using this football rivalry to do something good,” said Loree McCary, SFA assistant athletic director. “With the two groups of students working together, we made this a very successful drive.”

SFA’s women’s basketball team first became involved with Be The Match in 2011. Since then, SFA athletics has adopted the program and collaborated with Berthot to continue bringing drives to campus.

Be The Match has managed the largest and most diverse bone marrow registry in the world during the past 25 years, according to the organization’s website. People who sign up for the registry commit to being a marrow donor until their 61st birthday or until they wish to be removed from the registry. Bone marrow transplants can help save patients battling certain types of blood cancers such as leukemia and lymphoma, and genetic diseases.

Brian Allison, community engagement representative for Be The Match, was on site helping educate potential donors.

“We work with patients in every state who are battling blood or bone illnesses,” Allison said. “Basically, if their doctor tells them their only chance for survival is a stem cell or marrow transplant, they have to find a matching donor. About 30 percent of the patients will have a match within their family, but 70 percent do not, so they must rely on a stranger to save their life.”

Allison spoke to several SFA classes, including Berthot’s. Berthot explained how the community drive provided a real-world example of concepts discussed in class.

For more information on Be The Match, visit bethematch.org.