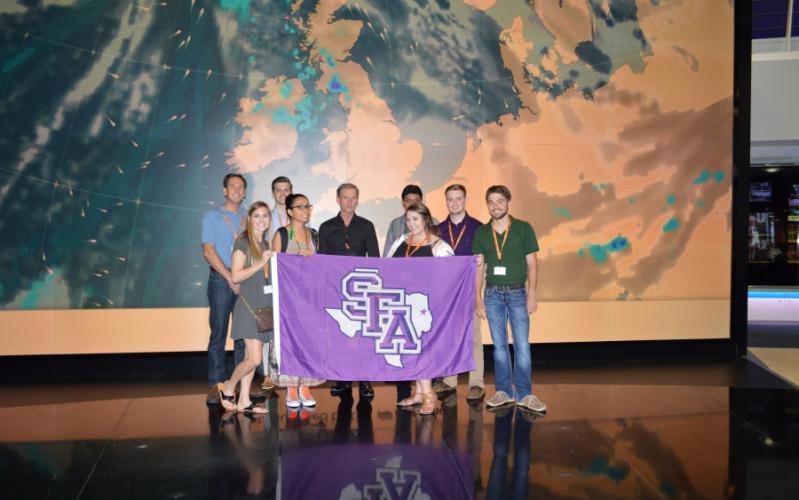 Stephen F. Austin State University students traveled to England, Belgium, Germany and the Netherlands for a behind-the-scenes look at international media. Sky News, a 24-hour international multimedia news company, was a favorite stop for the group.

“Students are exposed to vastly different cultures and experiences, which significantly broadens their understanding of and place in a global society,” Hendricks said. “Experiential learning such as an international study abroad trip motivates students to establish larger professional goals.”

During the first week, students explored London, England, and met with industry professionals from diverse media. Students toured VCCP, a creative marketing company; Chime Communications Limited, a marketing services company; Political Lobbying and Media Relations, one of Britain’s fastest-growing communications companies; Leo Burnett Company, an American globally active advertising company that is one of the largest agency networks; and Chartered Institute of Public Relations, one of the largest member organizations for public relations practitioners outside of North America.

“This was a once-in-a-lifetime experience. At Leo Burnett Company, professionals discussed advertising campaigns they have worked on such as McDonald’s. It was impressive and made me excited for the future because this is what I want to do in my career,” Fontenot said.

Additionally, students visited Time Out magazine, a leading global media and entertainment business that inspires and enables people to experience the best of cities, according to the magazine’s website. SFA students toured the magazine’s editorial and advertising process and engaged in a question-and-answer session with employees.

Although he is a radio/TV major, Bobby Mauro, a senior from The Woodlands, said he enjoyed learning about different media outlets.

“It was interesting to see Time Out magazine and other media options. We learned how staff members create a cover and social media content,” Mauro said.

Broadcast media also was on the agenda. Students had a behind-the-scenes look at Sky News, a 24-hour international multimedia news company based in the United Kingdom that provides news on TV, online and mobile devices.

“Sky News, the equivalent of America’s Fox News or CNN, was most impressive, and our students were able to see firsthand how an international television news network covered the queen’s speech on the opening day of Parliament,” Hendricks said.

No visit to London is complete without sightseeing. In London’s West End, students participated in a walking tour on Fleet Street and viewed the Bride’s Church, known as the journalist’s church, and the Daily Express and the Daily Telegraph buildings. Also, students saw Buckingham Palace, Westminster Abbey, Saint Paul’s Cathedral, the Tower of London and Kensington Palace.

“The trip was exciting and intriguing,” Mauro said. “I have German and English heritage, so it was cool to walk where my ancestors walked. I was really excited about the historical aspects of the trip.”

During their second week abroad, students traveled to Belgium, Germany and Amsterdam. In Belgium, students took a walking tour of Brussels, the country’s capital and administrative center of the European Union, and Bruges, a historic location known for its architecture and arts.

“This station is taking TV to the next level; it’s the future of TV,” Mireles said. “This visit made me realize it’s going to take hard work for me to achieve my goals, but it got me excited to move forward with my career.”