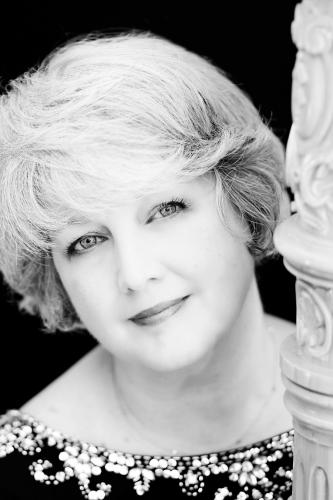 “They were colleagues and friends in Paris,” Mitchell said. “Caplet is best recognized as a fine conductor, but he also orchestrated many of Debussy's short piano pieces.”

The program includes Debussy’s Sonata for Flute, Viola and Harp and Caplet’s Conte Fantastique for Harp and String Quartet based on Edgar Allan Poe’s short story “Mask of the Red Death,” in which Mitchell plays the protagonist harp.

“You wouldn't think of the harp as an instrument that could express fear and dread,” Mitchell said, “but the compositional writing is complete with a terrifying account of an inevitable pursuit combined with the gaiety of ignorance, the clock striking 11 and 12, then the horrible knock on the door and ensuing chaos.”

The performance of the Caplet work will be staged with a reading of Poe's short story by Stephanie Murphy, assistant professor of acting/directing in SFA's School of Theatre.

“It's going to be an elegant spook before All Hallows' Eve,” Mitchell added.

Emily Mitchell enjoyed a 30-year career in New York City where she was principal harpist for the incomparable Eos Orchestra. She was an established name in the television, motion picture and recording studios of New York and taught on the faculties of New York University and Purchase College. Mitchell toured the United States as a soloist and chamber musician for Columbia Artists’ Community Concerts for many years. She relocated to Texas in 2008 and was appointed to the music faculties of SFA and Sam Houston State University. Mitchell performs with Saint Cecilia Chamber Music Society in Houston, Better Than One harp duo with Jaymee Haefner, and is director of The New Houston Harp Ensemble.

The concert is part of the School of Music’s Calliope Concert Series. Tickets are $8 for adults, $6 for seniors and $3 for students and youth. For tickets or more information, call the SFA Fine Arts Box Office at (936) 468-6407 or visit www.finearts.sfasu.edu.