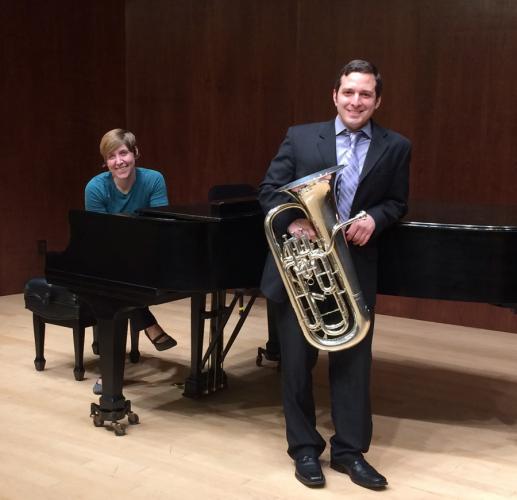 SFA music faculty members Kayla Roth and Dr. Danny Chapa, along with Dr. J.D. Salas, associate professor of tuba and euphonium, will perform “A Night of Song” at 6 p.m. Tuesday, Dec. 5, in the Music Recital Hall on the SFA campus.

The concert, which is part of the School of Music’s Calliope Series, will include German art songs, or lieder, from the Romantic era, or the mid to late 1800s.

“It was popular at the time for musically-inclined friends to get together to have liederabend, or a night of song, in which lieder would be performed in small, intimate settings,” explained Roth. “These songs were usually a collaboration between voice and piano.”

German works to be performed include "Feldeinsamkeit" by Johannes Brahms; "Ständchen" by Franz Schubert; "Das Wandern" by Schubert; variations by Danny Chapa; "Heidenröslein" by Schubert, variations by Roth; "Die Erlkönig" and "An die Musik" by Schubert; "Zueignung" by Richard Strauss; "Morgen!" by Strauss, arranged by Roth and featuring Salas; and  "Im wunderschönen Monat Mai" and "Ich grolle nicht" by Robert Schumann.

Schubert’s "Die Erlkönig" is one of the most well known German art songs, according to Roth. Based on a poem by Johann von Goethe, the song tells the story of a father and his ailing son, riding on horseback to their home. The son, sick with fever, insists that the Elf King (die Erlkö nig) is trying to attack him.

“It is an interesting piece for both performers; the vocalist must sing as the narrator, father, son and Erlköing, while the pianist must imitate the sound of horse hooves with incessant triplets,” Roth said. “To emulate the different characters’ voices, Dr. Chapa will use multiple instruments.”

The recital will also feature selections from Schumann's “Dichterliebe,” considered to be his most well known song cycle, consisting of 16 settings of poems by Heinrich Heine. Along with Schubert, Schumann is one of the leading figures in the genre, Roth said.

“‘Dichterliebe’ was written in 1840, Schumann's ‘year of song,’ in which he wrote over 100 songs in response to his long and arduous courtship of his future wife, Clara Wieck,” Roth explained. “We will be performing ‘Im wunderschönen Monat Mai’ and ‘Ich grolle nicht’ from this cycle.”

Based on a poem by Hermann von Gilm. "Zueignung," roughly translated as “dedication” or “devotion,” is one of the first songs published by Strauss and remains one of his best-known pieces. Like much of Strauss' music, it is rich in thick, closely scored harmonies and chromaticism, Roth said.

“Our goal in this recital is to take the most well-known lieder and perform it in a different way, namely that the vocal melodies will be played on low brass instruments,” she said. “We will perform two themes and variations.”

Chapa has composed variations on Schubert's "Das Wandern," showcasing his technical skill, and Roth has a set of music parodies on Schubert's "Heidenröslein," each variation an imitation of a particular composer.