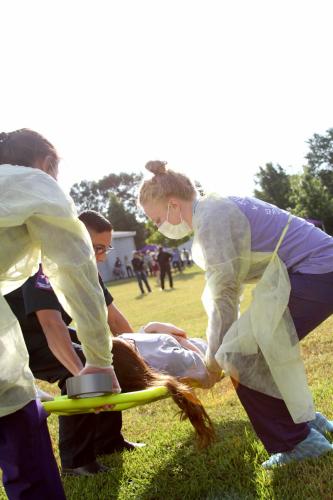 Students enrolled in Stephen F. Austin State University’s DeWitt School of Nursing recently participated in a community-crisis simulation to help prepare them for natural and other disasters. During the simulation, students acted as both patients and medics to help them better understand both perspectives.

During the crisis simulation, fourth-semester nursing students divided into two groups. One group acted as medics and cared for patients who had been affected by a natural disaster while the other group acted as the patients. To further complicate the scenario, both groups had to endure a zombie attack during the drill.

Students participated in two simulations with members of each group reversing roles to ensure each student had the opportunity to act as a medic and patient. After the first simulation was complete, instructors held a debriefing where they gave critiques and shared information on how to correct deficiencies The students then attempted to correct the deficiencies during the second simulation.

Carol Athey, clinical instructor of nursing at SFA, said the simulation helps students put their nursing knowledge into practice. “During the simulation, students see how to use different medical resources, set up triages, assess various levels of injuries and communicate with each other,” Athey said.

Senior nursing students Addie Bowland, of Henderson, and Amber Comstock, of Lufkin, were selected as simulation team leaders by their classmates. Both students have been preparing for the simulation since the summer by gathering supplies, recruiting volunteers to play the roles of zombies and security personnel, and preplan the scenarios for each participant during the simulation.

Members of the Nacogdoches Fire Department and emergency medical services assisted and discussed with the nursing students how to anticipate the needs of first responders. They also trained students on how to properly use emergency equipment such as backboards.

“We finished with a better understanding of our roles as nurses when it comes to a disaster or mass-casualty event,” Comstock said. “The simulation has made us more aware and appreciative of what first responders do.”

Though nursing students participate in clinicals, which are supervised sessions for nursing students to observe and learn in real-world health care environments, this disaster drill provided additional insight.

According to Bowland, hospital situations are much more organized and controlled. “During the simulation, the wind was blowing our supplies away, and people were yelling for help while medics were trying to get to them without being contaminated by zombies,” Bowland said.

According to Athey, these types of simulations often can be helpful in preparing future nurses for natural disaster situations like hurricanes and other weather-related events.

“A few years ago, a former student called me after a tornado hit Waco,” Athey said. “She told me the disaster drills she was involved in at SFA helped prepare her for that disaster. As instructors, our goal is to prepare students for any type of medical situation that might occur. These types of drills may eventually save lives.”