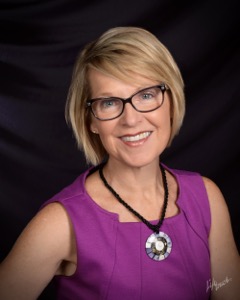 "With SFA's long-standing history as a teachers college, it is an honor to represent SFA as the 98th president of ATE," Embry Jenlink said.

The ATE was founded in 1920 as a professional member organization devoted to the improvement of educator preparation for school-based and university teacher educators. Its members represent more than 700 colleges and universities, 500 major school systems, and a majority of state departments of education within 41 active state and regional affiliated units.

During the annual meeting, Embry Jenlink provided the closing keynote address highlighting the conference theme she selected - Re-Imagining Educator Preparation within a Democracy: Teacher Educators as Public Intellectuals. She said she is passionate about the theme, which will stimulate dialogue and scholarly inquiry across two national conferences and be used to frame policy-making and advocacy with stakeholders in educator preparation.

"Every child who is educated in the United States must be prepared to participate in democracy. These responsibilities include critical-thinking skills, the ability to debate and deliberate, a willingness to compromise, and the ability to actively participate in one's community and civic life," Embry Jenlink said. "As teacher educators, we must take up the mantle of social, political and moral responsibility to reclaim educator preparation for the common good. A critical responsibility of ours is to prepare a well-educated citizenry, which is able to sustain our democracy."

In the coming year, Embry Jenlink will provide keynote addresses during several regional and state conferences. She also will preside over the 2017 summer conference in Pittsburgh, Pennsylvania, and the 98th annual meeting in Las Vegas. An appointed member of the World Federation of Teacher Educators Board of Directors, she also will attend the ATE/Europe meeting in Dubrovnik, Croatia.

Embry Jenlink joined SFA in 1998 as an associate professor in the James I. Perkins College of Education. She served as a site professor on the campuses of Nettie Marshall Elementary and Thomas J. Rusk Middle School, and as coordinator of master's programs in secondary education.

In 2003, she was promoted to professor and joined the faculty within the doctoral program in SFA's Department of Secondary Education and Educational Leadership. At SFA, she has directed or served as committee member on more than 60 doctoral dissertations and theses.

She has also served on numerous university committees, including Academic Affairs, Graduate Council, College Council and as chair of the Faculty Senate from 2014-16. Locally, Embry Jenlink also serves as a member of the Daughters of the American Revolution and as a commissioner on the Nacogdoches Housing Authority Board.