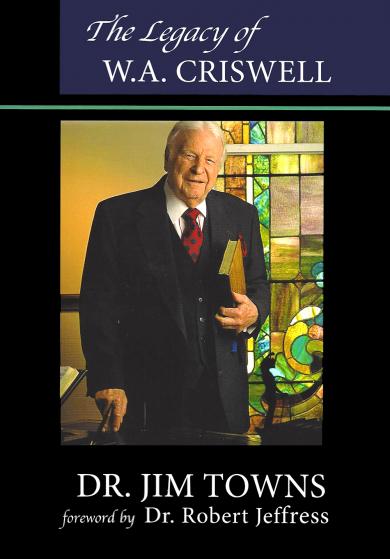 “The Legacy of W.A. Criswell” examines selected speeches from two-term president of the Southern Baptist Convention and longtime pastor of the First Baptist Church in Dallas, W.A. Criswell. Jim Towns, SFA professor of communications, authored the book, which is available for purchase on tamupress.com.


NACOGDOCHES, Texas — A new book by Dr. Jim Towns, Stephen F. Austin State University professor of communications, examines selected speeches from 1956 to 2002 of W.A. Criswell, who was a pastor, author and two-term elected president of the Southern Baptist Convention.

In the book, “The Legacy of W.A. Criswell,” Towns discusses Criswell’s influence on Christianity, specifically within the Baptist denomination and analyzes Criswell’s conservative impact on the Southern Baptist Convention and Christianity as a whole.

Criswell was named pastor of the First Baptist Church in Dallas in 1944. He spent the remainder of his life at First Baptist, preaching more than 4,000 sermons from its pulpit.

During Criswell’s tenure, church membership grew from 7,800 to 26,000 with weekly Sunday school attendance in excess of 5,000. Under his leadership, the church expanded to include multiple buildings on five blocks in downtown Dallas, eventually becoming the largest Southern Baptist church in the world.

Criswell was an early pioneer of the modern megachurch phenomenon, and he introduced a number of innovations that became a model for growing churches throughout the country.

He was awarded eight honorary doctoral degrees and published 54 books. Many of his sermons were televised nationally. He died in 2002.

Towns said he was prompted to write the book to detail Criswell’s 50-year influence on churches and Christian teaching.

“No one has ever written about the social or spiritual impact Criswell left behind,” Towns said. “His legacy has been deeply burned into the brand of Texas and Baptist churches around the nation and the world. It is a legacy that will not ride quietly into the sunset.”

In addition to his influence from the pulpit and through his writings, Criswell was a mentor to many prominent pastors, including evangelist Billy Graham.

Towns, who has taught at SFA for 52, years, has published 14 books. “The Legacy of W.A. Criswell” is available in paperback for purchase on tamupress.com. Use code 3B to receive a 30% discount.