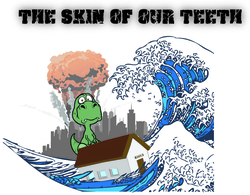 The Stephen F. Austin State University School of Theatre will present Thornton Wilder's Pulitzer Prize-winning play "The Skin of Our Teeth" at 7:30 p.m. Tuesday through Saturday, April 25 through 29, in W.M. Turner Auditorium in the Griffith Fine Arts Building on the SFA campus.

NACOGDOCHES, Texas - The Stephen F. Austin State University School of Theatre is taking on a big task. SFA Playwright-in-Residence Jack Heifner, his teaching colleagues and theatre students will present Thornton Wilder's Pulitzer Prize-winning "The Skin Of Our Teeth" April 25 through 29 as part of this year's Mainstage Series.

It's a play that Heifner has always admired and wanted to direct, despite its large 20-member cast, extensive scenery and multiple costumes and props.

"It's a huge play and is rarely done because of the size of the production," Heifner said. "It is a comedy that is at the same time funny, touching, sensible and absurd. It is a study in how we move forward through the problems of life with optimism and courage."

"The Skin Of Our Teeth" was first performed on Broadway in a 1942 production starring Tallulah Bankhead, Montgomery Cliff and Fredric March. Because of its large cast, making it costly to produce, it hadn't been seen on Broadway since a 1975 revival that closed after seven performances … until now. A Theatre for a New Audience's Brooklyn revival earlier this spring "reestablishes 'The Skin of Our Teeth' as "one of the finest American plays of the 20th century," Terry Teachout recently wrote in a Wall Street Journal review.

"It seems to truly be the right play at the right time, but maybe it is, in fact, timeless," Heifner said. "I'm thrilled we are presenting it here at SFA."

Completed by the author less than a month after the Japanese attack on Pearl Harbor on Dec. 7, 1941, "The Skin of Our Teeth" broke from established theatrical conventions and walked off with the 1943 Pulitzer Prize for Best Drama.

The Thornton Wilder Society uses the following description of the play on its website: "Time magazine called 'The Skin of Our Teeth' 'a sort of 'Hellzapoppin'' with brains. Combining farce, burlesque and satire (among other styles), Thornton Wilder departs from his studied use of nostalgia and sentiment in 'Our Town' to have an Eternal Family narrowly escape one disaster after another, from ancient times to the present."

Heading up the cast of characters are "George and Maggie Antrobus (married only 5,000 years); their two children, Gladys and Henry (perfect in every way!); and their maid, Sabina (the ageless vamp) as they overcome ice, flood and war - by the skin of their teeth," the website explains.

The duality of the roles the student actors will portray - actors playing actors - and the fact that many of the actors are cast in multiple roles and many costume changes, will be a challenge for the director, the production staff and actors.

"One actor plays a cleaning woman, a dinosaur, a distraught woman in the audience, a dresser for the leading lady and Aristotle," Heifner said. "Most of the actors, except the leads, are playing different characters in each act."

The play is appropriate for anyone and all ages, Heifner said, but the subject matter may not interest someone younger than a teenager. He suggests the play would be rated PG13. There is no offensive language.

"I want the audience to have an enjoyable evening, to admire the work of the talented students and have an appreciation of Thornton Wilder's thoughts and words," he said.

"The Skin of Our Teeth" will be presented at 7:30 p.m. Tuesday through Saturday, April 25 through 29, in W.M. Turner Auditorium in the Griffith Fine Arts Building on the SFA campus. Single tickets are $15 for adult, $10 for senior and $7.50 for student/youth. For tickets or more information, call the SFA Fine Arts Box Office at (936) 468-6407 or visit http://www.theatre.sfasu.edu/.