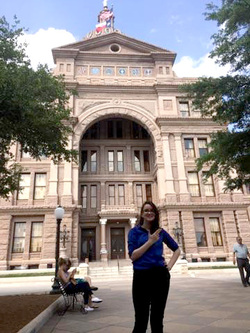 Lenert, who is a double major in biology and psychology from Spring, presented research on the effects of caffeine on individuals who consume caffeine daily. She used the quantitative electroencephalography method to track changes in brain activity during caffeine withdrawal and shortly after drinking coffee.

"Representing SFA in Austin was a very cool experience for me. I enjoyed talking to other researchers and telling them about the research we do at SFA," Lenert said. "Presenting at the conference taught me how to be more comfortable talking about my research to people who aren't familiar with the field."

Dr. Luis Aguerrevere, associate professor and director of the Human Neuroscience Lab at SFA, served as Lenert's research mentor and attended the conference with her.

"I believe my role as her mentor is to foster growth throughout her professional career pathway. My role for this project was to provide scientific and statistical support," Aguerrevere said. "Before this project, Melissa worked with me on a number of research projects, most of which have been presented at national conferences. Thus, for this specific project, she operated with a high level of independence."

Dozens of research projects were displayed in poster format reflecting the work of numerous undergraduate students representing more than 50 academic and health-related institutions across Texas.

During the conference, Lenert toured the Capitol and visited the meeting rooms of the Texas Senate and House of Representatives. Following the tour, she attended two panel discussions where professors and researchers in science, technology, engineering and mathematics-related fields, and the humanities discussed their personal journeys and how research influenced their lives.