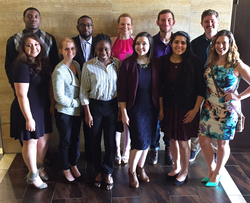 The Pine Log, SFA's student newspaper, earned 20 awards for content produced during the 2016 calendar year, while the Stone Fort yearbook received 17 separate honors for its 2016 edition. In addition, SFA TV-2 was recognized with four awards for previously published content, while KSAU radio received one award. In the previously published contests, SFA students compete against their peers at institutions with similar enrollment and program size.

In addition, Parastoo Nikravesh, managing editor for The Pine Log, received TIPA's prestigious Jeff Henderson Scholarship for Journalism Excellence, which is awarded annually during the conference.

"The TIPA convention and competition is an opportunity to showcase the work our talented mass communication students produce throughout the year as they are gaining real-world experience contributing to our on-campus media outlets," said Amy Roquemore, SFA director of student publications and divisional media and adjunct faculty member in the mass communication department. Roquemore accompanied the students to the convention along with Rachel Clark, SFA student publications coordinator and yearbook advisor.

"As is their tradition, our students represented the university extremely well, not only with impressive submissions for the canned competition but also with award-winning work they produced under deadline pressure in the highly competitive live contests," Roquemore said. "These accolades are a testament to the skill and determination of SFA students preparing to enter the mass communication field, and it is a joy and privilege to work with them every day."

Fisher, a senior mass communication major from Spring, attended the conference for the second consecutive year, and said it was exciting to see SFA student media recognized as being among the best in Texas. Fisher will graduate in May and has been accepted into the university's Master of Business Administration program beginning this fall.

"I find a lot of joy being able to represent SFA and competing in something I love," Fisher said. "I am so proud of myself and my peers for all of the hard work we do to represent SFA in the best light possible. I think bringing home this many awards really shows how passionate we are about our jobs and making our school proud."

Established in 1909 at Baylor University, TIPA is the largest and oldest collegiate press association in the U.S. The organization works to recognize excellence in campus media and open channels of communication and cooperation among student media programs at two- and four-year colleges and universities in Texas. More than 440 students representing 45 of TIPA's more than 50 member institutions attended the 2017 conference in Dallas.

The following is a complete listing of TIPA awards SFA students earned for work produced during the 2016 calendar year: