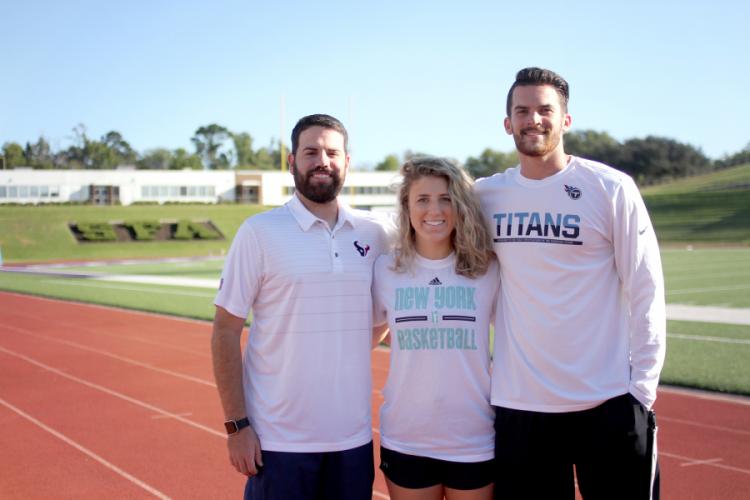 
NACOGDOCHES, Texas — Being on the sidelines never looked so good.

During their internships, both Oliver and Elliott were tasked with helping athletes with their morning treatments, setting up and breaking down the field for daily practices, administering post-practice treatments and more.

“As far as athletic training goes, the NFL is considered one of the top jobs you can get,” Elliott said. “Being part of the NFL, seeing how it operates, and being around some of the world’s best athletes and helping them perform their best was a really cool experience.”

Both Elliott and Oliver worked with their team’s defensive backs. For Oliver, the Houston Texans’ game against the New England Patriots was a highlight of his internship.

“There was one athlete whom I worked with a lot. It was surreal when he ran out of the tunnel and onto the sidelines to play against the reigning Super Bowl Champs with 75,000 people screaming,” Oliver said. “That’s when it hit me that I was in the NFL. To see him back on the field for the first time in months and have a great game was rewarding.”

Likewise, Godwin’s work routine was similar to Oliver’s and Elliott’s. Every morning she would set up for practice, prepare equipment and administer treatments. She was the only intern for the team.

“It was great to be put into that environment and expected to perform from the get go,” Godwin said.

While in the Big Apple, Godwin experienced a change of pace and learned how to operate in a new environment.

“New York is busy and fast. It truly is the city that never sleeps and that’s kind of the attitude of the New York Liberty,” Godwin said.

The team practiced in Tarrytown, New York, and would often play in the infamous Madison Square Garden. Godwin would be on the sidelines at every game and described the experience as “surreal.”

“I was walking around the hallways thinking there were so many famous people here before me. I felt like a little fish in a big pond,” Godwin said.

Becoming an athletic trainer wasn’t always the plan for Godwin. As an undergraduate, she dabbled in chemical engineering and exercise science, but she soon began researching athletic training as a career. Oliver, however, played college baseball for four years and considered a career in the medical field. His passion for sports lead him to athletic training.

“I fell in love with it,” Oliver said. “I’ve been called to serve and doing this is a way to give back to athletes now that I’m not playing anymore. The feeling you get seeing an injured athlete you’ve been working with get back on the field and play the sport he loves is amazing. You can’t get that feeling from any other profession.”

Similarly, Elliott played college basketball for four years and said he was hurt about 50 percent of the time, which led to him developing a good relationship with one of the athletic trainers.

“He helped me a lot with rehab, physically and mentally. The way he mentored me and invested in me made me want to have that same relationship and be able to help other athletes like he did for me,” Elliott said. “I knew through my experiences I could be empathetic to a lot of what other college athletes are going through.”

Through SFA’s professional athletic training program led by Dr. Linda Bobo, students earn a Master of Science in athletic training and participate in various hands-on learning experiences such as internships and clinical work. Students work with athletes in various sports and work with doctors in general medical settings to gain real-world experience.

“I had a lot of at experience coming into the program; however, I lacked confidence. Dr. Bobo’s program is rigorous and very helpful. You either sink or swim, and I chose to swim,” Oliver said. “I learned on the go, so when it came to the summer, it was a breeze. I’m really thankful for this program and all it’s done to help me in just one year.”