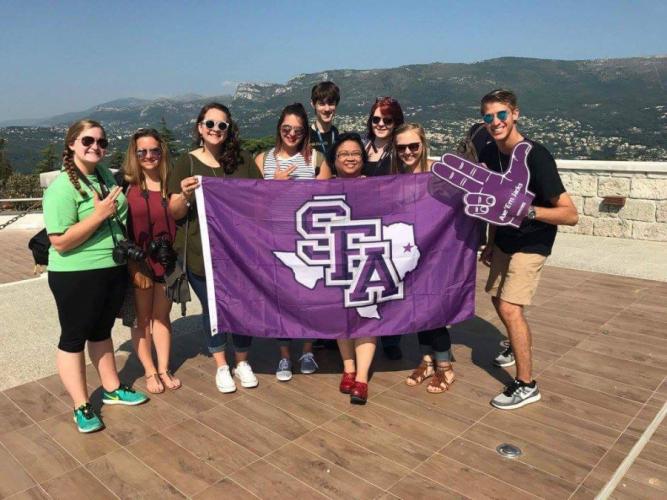 SFA students worked at the American Pavilion, the center of activity at the festival for the American film community, and networked and engaged in various experiential-learning opportunities.

“Being able to network with like-minded people from around the country helps people become better filmmakers,” said Sophie Watson, senior film major from London, England. “Working the film festival also helped with career development for us as filmmakers because this is another way to get our foot in the door.”

“Experiences like this open the students’ eyes to how the hospitality and film industries function, and it also presents students with opportunities and possibilities for after graduation,” Causin said.

During the festival, students worked a fundraising event at the American Pavilion, participated in setting up and breaking down areas for various events, attended film screenings, walked the red carpet and more.

“I learned there is a realm of fields within hospitality and that the list of potential careers is endless,” said Alexandra Powell, Round Rock senior hospitality administration major. “I also learned how to flip a venue for an event and all of the behind-the-scenes work that goes into it.”

Jade Godoy, Huffman senior hospitality administration major, said traveling to Cannes encouraged her to get out of her comfort zone and try new things.

“I never thought I would get the chance to visit France and attend the Cannes Film Festival. I wanted to get the most out of my experience, so I made sure to see and do as much as I could,” Godoy said.

When students weren’t working the pavilion, they had free time to enjoy the festival.

“I loved the film screenings,” Godoy said. “It was amazing to see the film industry from a different perspective, plus walking the red carpet was pretty magical.”

Tori Rice, a film major from Austin, had her short film “Helpless” accepted into the Short Film Corner of the festival.

“Once I got to Cannes, I quickly realized there was more to it than just having my film accepted into the short corner. I had access to private parties and special events,” Rice said. “I also enjoyed meeting producers and directors. It was great to see industry professionals become more interested in me as a filmmaker and not just as a student.”

“This experience reminded me that making it big in the film industry will take time,” Watson said. “It taught me you should not be afraid to make that introduction, that phone call or that jump that could propel you to meet someone who could benefit your career in the long run.”

Outside of the festival, students traveled to the Château de Bellet vineyard, the medieval village of Éze, France, and Ventimiglia, Italy.