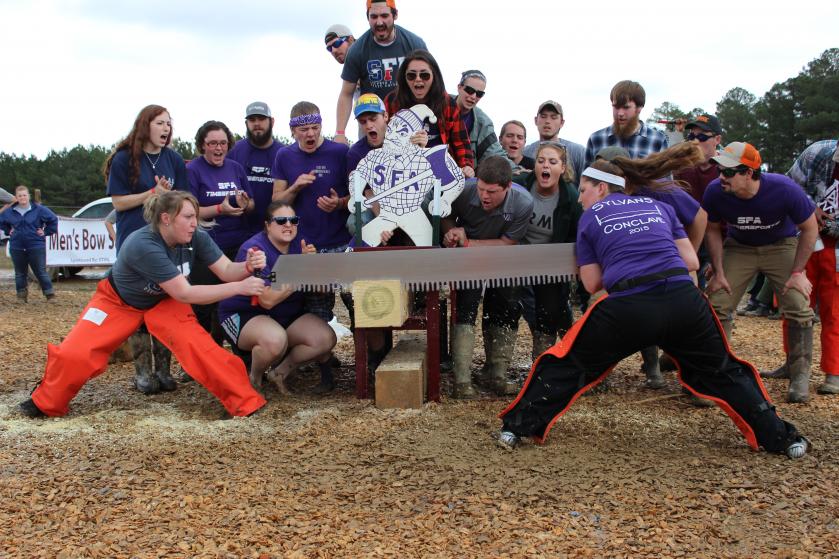 
NACOGDOCHES, Texas - The history of Stephen F. Austin State University’s timbersports team, the Sylvans, is inexorably linked to the university’s forestry program. While the university mascot may be the Lumberjack — homage to the region’s rich natural resources and forest-based economy — the Forestry Building may be the only location on campus where one might see a student wielding a chainsaw, ax or crosscut saw and not blink an eye.

The Sylvans Professional Forestry Club, as it was originally named, adopted its constitution and was recognized by the university on Dec. 17, 1946, the same year the SFA Department of Forestry was established.

Each year, the SFA Sylvans compete in both physical and technical events against often-larger universities such as Auburn University, Clemson University, Louisiana State University, the University of Georgia and Virginia Tech.

Despite their tough competition, the SFA Sylvans have consistently risen to the occasion. According to Dr. Jeremy Stovall, assistant professor of forestry at SFA’s Arthur Temple College of Forestry and Agriculture and Sylvans faculty adviser, the Sylvans won first or second place in 29 out of the 31 Southern Forestry Conclaves held from 1986 to 2016.

The team hopes to continue this streak as SFA hosts the 60th annual Southern Forestry Conclave held March 17 - 18, 2017. Stovall explained that due to the amount of space and logistics required for physical competitions, as well as the sheer number of participants, the event will be held at the Durango’s Canyon event venue located in Mount Enterprise.

“The Sylvans student leaders are driving the planning process and will be handling every aspect of hosting the 2017 conclave,” said Stovall. “We have a great group of about a dozen students who have been actively involved thus far.”

The conclave consists of 14 physical and eight technical, or academic-based, events. The physical events are founded upon historical logging activities. Birling, for example, can be traced back to the era of forestry during which logs were floated downriver to sawmills for processing. Lumberjacks were required to travel atop the moving mass, hopping from log to log in an effort to prevent jams from forming at river bends or along sandbars.

Thankfully, modern birling is much safer than these treacherous log drives of yore. Now, two competitors attempt to balance atop a floating log while rapidly spinning the log with their feet. The final competitor to fall into the water wins. The intense physicality of these events is what first appealed to Zack Ovelgonne during his freshman year at SFA.

“It just seemed like the Sylvans was the best fit for me,” he said. “It’s like being on a sports team.”

Ovelgonne, a senior forest wildlife management major, serves as president of the organization and participates in five of the 14 physical events offered.

While timbersports are characteristically perceived as male-dominated activities, Kirbee Bowman, Sylvans treasurer, explained that the team is very inclusive.

“When competing in the 2015 conclave hosted by Mississippi State, my women’s crosscut partner and I were less than a second away from breaking the conclave record for the event,” Bowman said.

“I thought that since I was not a forestry major, the Sylvans would not be accepting, but I could not have been more wrong,” she said. “Everyone is welcome to join Sylvans and encouraged to try any event he or she wants.”

In addition to the Southern Forestry Conclave, the Sylvans also complete service projects throughout the year. Last year, they planted more than 20,000 trees during a volunteer reforestation project. Additionally, they often assist community members in completing tree and brush removal and conduct demonstrations during campus events.

The 2017 Southern Forestry Conclave, sponsored by STIHL, is a free event and open to the public. Events take place from 1 to 5 p.m. on Friday, March 17, and from 8 a.m. to 5 p.m. on Saturday, March 18. To learn more about the Sylvans, as well as the 60th annual Southern Forestry Conclave, visit www.sfasu.edu/conclave, or contact Dr. Jeremy Stovall at stovalljp@sfasu.edu.