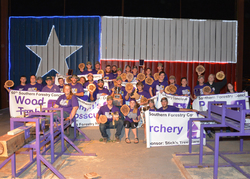 Members of Stephen F. Austin State University's timbersports team, the Sylvans, secured first place at the 2017 Association of Southern Forestry Clubs' Conclave held during spring break in Mount Enterprise. In addition to winning the championship, the club planned and executed the three-day event that hosted 12 other universities from across the Southeast. Pictured, Sylvans team members celebrate their win by showcasing the plaques and banners of the individual competitions they won.

The team, primarily comprising forestry students, competed in a series of technical and physical events against 12 other Southern universities, including Clemson, Auburn, Virginia Tech and Louisiana State University.

Dr. Jeremy Stovall, SFA associate professor of forestry and Sylvans faculty advisor, said the win was especially meaningful because it marked the 40-year anniversary of SFA's first Southern Forestry Conclave win in 1977. Many of the alumni who competed on that team were present to support current students during the competition.

"We worked a lot with the alumni this year, and they were fantastic," Stovall said. "Alumni helped coach current Sylvans competitors in several events and cheered them on in all the others."

While competing in this annual event is challenging, hosting it is a monumental task. Stovall and his team of student leaders, as well as faculty and staff members from SFA's Arthur Temple College of Forestry and Agriculture, began preparing for the event in 2015. Leading up to the competition, Stovall and more than 35 students worked 15-hour days to finalize logistics.

"We moved about 15 trailer loads of wood and supplies to set everything up," Stovall said. "We also served 1,750 meals, set up a concert, hosted the Stihl TIMBERSPORTS Collegiate Series, organized the eight Conclave academic events and prepared the 14 Conclave timbersports events."

"This win is huge for the team and for me," said Zack Ovelgonne, forest wildlife management senior and Sylvans president. "Losing to Clemson University last year by only 13.5 points left a very bitter taste in all of our mouths."

Ovelgonne said since the 2016 loss, he and the team were determined to redeem themselves by not only hosting the best event in the history of the Association of Southern Forestry Clubs, but by winning it, as well.

With this 2017 win, the SFA Sylvans strengthened their position as the second winningest team in Southern Forestry Conclave history. Clemson University placed second in the competition while the University of Arkansas at Monticello finished in third place.