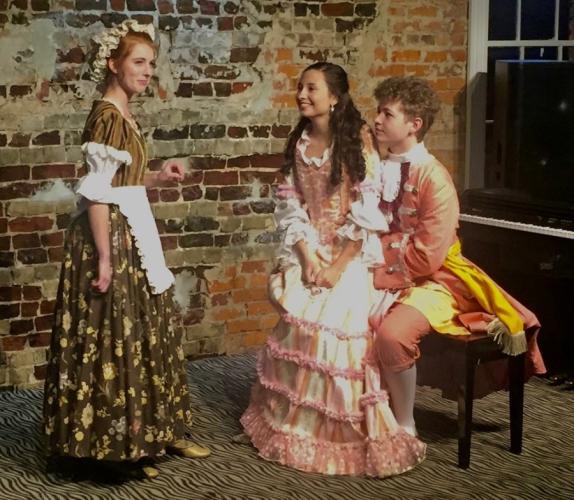 
NACOGDOCHES, Texas – Creating costumes for a period play like Molière’s “Tartuffe” takes time, skill and a great deal of preparation. The best designers do extensive research before creating sketches or starting construction.

This past summer, Stephen F. Austin State University Professor of Theatre Angela Bacarisse happened to be in Europe with touring theatre students at the Edinburgh Festival Fringe in Edinburgh, Scotland. She took the opportunity to visit France, as well, to do museum and gallery research for the School of Theatre’s upcoming presentation of “Tartuffe.”

“I was able to see actual paintings up close, instead of in a book or on a website,” she said.

The next step was to begin designing specific costume details by working with the play and character analysis, she explained.

“The clothing of this time period was described by one of my college professors as ‘everyone looks like an upholstered ladder-back chair,” Bacarisse said. “I couldn’t agree more – stiff and upright, with lots of ribbon and froufrou.”

The School of Theatre will present “Tartuffe” at 7:30 p.m. Tuesday through Saturday, Oct. 3 through 7, in W.M. Turner Auditorium on the SFA campus. Set in the 17th century, the play depicts a con man (the title character) who has duped a wealthy businessman named Orgon. Impressed with Tartuffe’s pretensions of moral purity and religious piety, Orgon invites the imposter to move into his lavish Paris home and take full advantage of his hospitality.

Orgon’s family can see that Tartuffe is a hypocrite, but when they urge caution, Orgon takes offense and offers Tartuffe still more access to his property – and even to his daughter and his sensible wife, Elmire. She lays a trap for the lecherous grifter, but not before her husband has been taken for all they’re worth.

Bacarisse’s baroque-era costumes for “Tartuffe” will be beautiful and colorful, and matched with elaborate period wigs, according to Scott Shattuck, professor in the SFA School of Theatre and the play’s director.  “Just as much as the quick-paced acting style and designer Richard Ellis’s richly decorative scenery, the costumes will be one of the most enjoyable features of the show,” he said.

Costumes for a play like “Tartuffe” are difficult to build from scratch, Bacarisse said. Two students have been assigned that task, and the costume shop supervisor, Barbara Blackwell, is re-building many costumes drawn from the School of Theatre’s considerable storage. Additionally, the School of Theatre has rented a few costumes from the Texas Shakespeare Festival.

“One of these is from the production of ‘Tartuffe’ that I worked on there,” Bacarisse said, “but it’s being worn here by a different character.”

Movement on stage while wearing the elaborate costumes can be a challenge for student actors, Shattuck said.

“Folks in 17th century France dressed in ways that were more elaborate and restrictive than the T-shirts, shorts and sneakers that today’s college students are used to,” Shattuck said. “They’ll need to learn to move as if they’re accustomed to the period’s long dresses and so forth.

“Also, physical comedy always requires much more detailed planning and precision than the audience should realize,” he added. “Keeping the tempo lively and the surprises coming will be crucial to our success.”

“But gosh, the costumes are pretty,” Bacarisse said. “Assistant costume designer senior Danika Pettyjohn is doing a great job working with the decorations for each costume.”

Single tickets are $15 for adult, $10 for senior and $7.50 for student/youth. For tickets or more information, call the SFA Fine Arts Box Office at (936) 468-6407 or visit http://www.theatre.sfasu.edu/. The play is recommended for mature audiences.