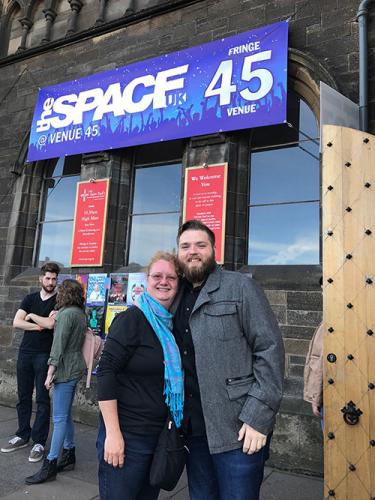 
NACOGDOCHES, Texas – Stephen F. Austin State University theatre students had returned only a few weeks from the School of Theatre’s highly successful biennial trip to the Edinburgh Festival Fringe in Edinburgh, Scotland, when the planning for the 2019 trip was underway.

Begun in 1947, the Edinburgh Festival Fringe is the largest international theatre arts festival in the world. During festival season, which is three weeks in August, the International Festival, the Festival Fringe, jazz festival, art festival and book festival all take place in Edinburgh. The event has become a much-anticipated learning opportunity for SFA theatre students to tour a show on the international stage, according to SFA Professor of Theatre Angela Bacarisse.

“The trip is a bit of a whirl-wind experience,” Bacarisse said. “The students have technical rehearsals and performances on their first day in Edinburgh, and the remaining performances are spread out over the first week of the trip.

“They have opportunities to see productions by the other American universities participating in the Festival as well as the plethora of international productions,” she added. “In the space of three weeks, there are more than 30,000 separate performances. Deciding what to see can be daunting.”

The trip provides excellent networking for the students and a unique opportunity to spread the word about SFA to people from around the world, said Dr. Slade Billew, assistant professor of acting and movement in the School of Theatre and director of the play the students presented at the festival, “Closed For Repairs,” written by former SFA student Bobby Britton of Angleton.

“Our students actively engaged with new people that they met,” Billew said. “Many of the people they met throughout the trip came to see our show. I think seeing a range of international performances broadened their ideas of what theatre can be. And, I think performing in a non-traditional venue and for non-American audiences challenged their abilities as performers in ways that helped them grow.”

As an added bonus this year, the SFA School of Theatre was the first festival collegiate group to be asked to perform at a special event at the Scottish Arts Club. The trip also allowed the students to explore Edinburgh, including climbing Arthur’s Seat and attending the Military Tattoo.

“The students had a wonderful time and were consummate professionals when it came to work,” Billew said.

The School of Theatre sent its first student entourage to the Scotland festival in 2015 and then again this past summer. Both trips were equally successful, said Bacarisse, who has begun planning for the next Festival Fringe in two years.

“I already have collaborators and a show in mind,” she said.

The total cost per student is approximately $5,000, which includes airfare and room and board. Donations are accepted to help fund the trip, and various fundraisers will be conducted to help defray costs.