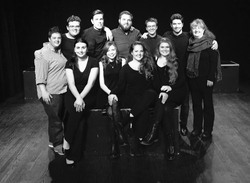 The semi-autobiographical play by Bobby Britton, senior theatre student from Angleton, was performed as a fundraiser to help defray the students' expenses for the trip. The Brazosport venue is where Britton got his start in community theatre, according to SFA Professor of Theatre Angela Bacarisse. SFA School of Theatre alumnus Wes Copeland is chairman of the board for Brazosport Center Stages.

"They were super generous, giving us the space and technical assistance as well as publicizing the event and running box office for us," Bacarisse said.

Bacarisse and Slade Billew, assistant professor of acting/directing at SFA, will lead the group through its festival performances in Edinburgh.

Britton's "jukebox-musical," which he wrote last fall, is about a young man's struggle to accept himself as it relates to his faith. It will be performed in Fringe Venue 45, the same theatre in which SFA students performed when they attended the festival in 2015. Bacarisse is hoping for similar educational experiences and opportunities for SFA's theatre students again this year. Students Jason Trevino and Anais Saenz participated in 2015 and will return to the festival this year.

"They had an opportunity to see theatre companies from all over the world perform," she said. "They were so excited to talk to each other and recommend the shows that they had seen. They also made friends with the students who were participating from other universities. It's a great networking opportunity."

The festival's advertising about the upcoming SFA production describes it as: "SFA student Bobby Britton's semi-autobiographical play leads us on a young man's journey to discover his personal truth in a conservative Texas town. Blending honest dialogue, contemporary songs, and powerful movement, this ensemble-driven piece takes on issues of identity and acceptance in the Bible belt. As the play moves through moments of intense despair and transcendent joy, performers use their bodies and voices to create the world of small town America, exploring the realities of feeling alone in the Lone Star State. The play is intended for mature audiences."

As a company, the students are responsible for venue rental fees, travel, equipment rental, and publicity and marketing, and fundraising efforts are important to the success of the trip, Bacarisse said. Students house manage, run the lighting and soundboards and stage-manage for their performances. The total cost per student is approximately $5,000, which includes airfare and room and board.

"We are so grateful for everyone who supports the arts and our students," she said. "Allowing them the opportunity to tour a show, perform abroad and learn more about our global community is a great gift."

Tax-exempt donations for the trip can be made at sfasu.edu/giving by clicking on the "give online" tab and writing "Scotland trip" for special instructions.