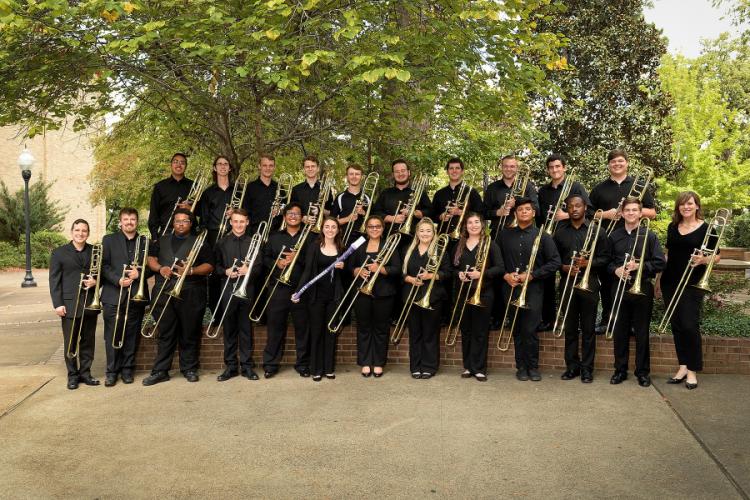 
NACOGDOCHES, Texas – The Trombone Choir at Stephen F. Austin State University will present a program that features a mix of musical styles when the choir performs at 7:30 p.m. Thursday, Nov. 9, in Cole Concert Hall in the Wright Music Building on the SFA campus.

“The tradition of the trombone choir dates back further than 500 years, so it is important that I expose students to the style of music originally composed for trombone as well as more recent literature,” Scott said.

"Canzona" by Nicholas DiNunzio was composed in the style of Renaissance music for trombone choir and utilizes the tradition of two opposing trombone choirs.

Another early piece, “The White and Sweet Swan” by Jacob Arcadelt (ca. 1505-1568), was originally a madrigal for voices. SFA music graduate student Josh Porter arranged the work for trombone choir.

Also on the program, J.S. Bach’s "Fugue in G Minor " was transcribed for trombone ensemble by Ralph Sauer.

More modern music includes Simon Wills’ "A Breach of the Peace,” which Scott describes as “a highly entertaining piece that uses stomping and clapping to enhance the Scottish melodies and rhythm.” The British Trombone Society commissioned the work.

Gary Slechta’s beautiful arrangement of “What a Wonderful World,” made popular by Louis Armstrong, will also be performed in a jazz style.