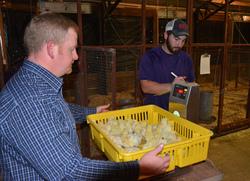 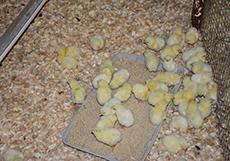 
NACOGDOCHES, Texas - According to Dr. Joey Bray, chair of Stephen F. Austin State University’s Department of Agriculture, if you purchase Pilgrim’s Pride brand chicken at your local Nacogdoches grocery store, there is a distinct possibility it was raised at SFA’s Broiler Research Center.

According to Bray, although the demand to raise antibiotic-free poultry is influenced by the relevant concern of the potential cultivation of antibiotic-resistant bacteria, it also is driven by the misconception that traces of antibiotics remain in the meat after processing and are thus ingested by the consumer.

“That’s never the case,” Bray said. “In fact, every flock that goes to the processing plant is tested, and if it shows positive for antibiotics, it is not used.”

He also said the cases in which a bird does test positive for traces of antibiotics is very rare because the antibiotics are withdrawn so early in a bird’s development they are completely cleared from the animal’s system by the time it is ready for processing.

However, in stepping away from the use of antibiotics, the industry must find new ways to continue to ensure overall poultry health and satisfactory growth.

According to Bray and Glasscock, SFA has conducted approximately five research projects focused on determining the effectiveness of prebiotics and probiotics as alternatives to antibiotics. Glasscock conducted the most recent research in his pursuit to earn a Master of Science in agriculture from SFA.

“Unlike antibiotics, probiotics are living organisms and rely on survival and replication in the gastrointestinal tract,” Glasscock said. “Probiotics are aimed at promoting the growth of beneficial gut microbes, and some more recently introduced probiotics are competitive exclusion products that help eliminate other negative microbes.”

Glasscock’s study evaluated the effects of feeding chickens a combination of bacteria from the genus Bacillus, as well as two treatments in which select groups of chickens were fed a combination of probiotics and a traditional antibiotic growth promoter. In addition to the regular monitoring of growth and development, intestinal samples were collected from eight randomly selected birds per treatment group and analyzed for total microbiome, or community of microorganisms.

While the treatment that utilized a combination of probiotics and a traditional antibiotic growth promoter produced the highest average yield weights, Glasscock explained that the treatments containing only probiotics also produced satisfactory results.

“Although we did not see any statistical difference in treatments with probiotics, the weights proved to be equal to or heavier compared to the control groups,” Glasscock said. “From this study, it was determined that probiotics Bacillus licheniformus, Bacillus megaterium and Bacillus subtilis could all potentially be substituted for antibiotic growth promoters with no negative impact on average body weight and feed conversion ratio.”