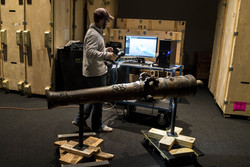 Dr. Robert Z. Selden Jr., research associate at Stephen F. Austin State University's Center for Regional Heritage Research, scans a 17th-century French cannon found during the excavation of La Belle - one of four ships led by explorer René-Robert Cavelier, the Sieur de La Salle, to North America in the 1600s. Selden will create a 3-D CAD model of the cannon, currently housed at the Bullock Texas State History Museum in Austin, for use by Texas and French officials.

NACOGDOCHES, Texas - Point by point, the image of a cannon slowly materializes on the computer screen. Fine grooves in the handcrafted bronze handles shaped like dolphins prove difficult for the scanner to visualize, but eventually, with enough manipulation, a 3-D rendering of a long-submerged French cannon comes into focus.

"The idea of reverse-engineering the cannon so that the French can cast a duplicate has been floating around for a while," said Dr. Robert Z. Selden Jr., research associate at Stephen F. Austin State University's Center for Regional Heritage Research. "We always enjoy working with the Texas Historical Commission and have really been looking forward to beginning work on this project."

A storied past
The cannon in question isn't just any cannon. Its story began centuries ago in 1684 when the weapon was first loaded onto La Belle, the ship of legendary French explorer René-Robert Cavelier, the Sieur de La Salle.

La Salle planned to cross the ocean with four ships and 400 people and land at the mouth of the Mississippi River. There, he was to establish a colony and forge trade routes in the name of French King Louis XIV, according to the Bullock Texas State History Museum in Austin where the cannon from La Belle is currently housed. The plan was never realized after La Salle lost ships to pirates and disaster, sailed past his destination and was killed by his own men.

In 1686, La Belle wrecked in a storm and sank to the bottom of Matagorda Bay. It remained there undisturbed for 300 years. In 1995, it was discovered by Texas Historical Commission archaeologists, who then fully excavated the wreck in 1996-97. The bronze cannon was one of three found among the ship's cargo.

"The photos of the excavation and preservation efforts are incredible," Selden said. "The scale of that excavation, which was surrounded by a coffer dam in the middle of Matagorda Bay, was remarkable. However, it is important to remember that the cannon is only one component of a much larger story; you really have to see the exhibit that the staff at the THC and the Bullock have put together to appreciate the magnitude of that undertaking."

The cannon is on display on the ground floor of the Bullock Texas State History Museum in the current La Belle exhibit. It has been a central feature of the exhibit since the museum opened in 2001.

Scanning history
The idea of scanning the cannon arose during discussions held by staffers at the THC, the Musée national de la Marine in Paris and the Bullock Museum for a La Belle exhibit in France.

"Because the recovery of one of the three bronze cannons aboard the ship was key in identifying the wreck in 1995 as La Salle's lost ship, the cannons are iconic and significant artifacts," said Bradford M. Jones, collections manager of the THC's archaeology division. "At the time, however, the cost and complexity of shipping an 800-pound bronze cannon back and forth across the Atlantic was recognized as a potential limiting factor on the exhibit, and the decision was made to explore having it reproduced in either the United States or France.

"Because high-resolution, 3-D scanning had the potential to relatively quickly and efficiently produce a (computer-aided design) model that could be shared and reproduced in a number of media, we contacted Dr. Selden," Jones said. "Selden had previously scanned artifacts for the THC's historic sites division and participated in 3-D technology training sessions with our archaeology division's Texas Archeological Stewardship Network."

Selden traveled to Austin in November to generate the 3-D surface scan of the cannon using a handheld scanner. Once scanned, the digital image can be resized for reproduction and a number of other purposes.

"The CRHR has a reputation for accuracy, and for producing open-access 3-D meshes and solid models that can be used for additional analyses, reproductions and 3-D puzzles," Selden said. "This also is a great opportunity for SFA to solidify its leadership role in digitizing and reverse-engineering the material culture associated with Texas archaeology and history.

"We have the tools. We have the expertise. We have everything that we need to generate this kind of deliverable while educating our students along the way - helping them to understand theory and process while also gaining practical experience. This is just one small part of the transformative learning experience that the CRHR provides to the graduate and undergraduate students who work with us."

The Austin museum is planning for a final La Belle exhibit to open in 2018, where the cannon will be displayed alongside the now-reconstructed hull of the ship.

"Dr. Selden has been a welcome partner with the THC in the past, and this time was no different," Jones said. "He and the two CRHR interns assisting him not only conducted the work in a professional manner, but also openly shared an enthusiasm for the history and significance of the work that made it feel like a true collaboration."

For more information regarding ongoing work with La Belle, visit the Bullock Museums' website at www.thestoryoftexas.com/la-belle/the-exhibit.