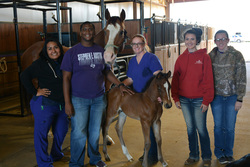 The results of a pilot study completed by Michaelle Coker, Stephen F. Austin State University's equine center supervisor, indicates that engaging broodmares in a moderate exercise program can help decrease the number of cycles per conception. Students enrolled in SFA's equine reproduction class played an integral role in the care and monitoring of each broodmare leading up to and during the birthing process. Pictured, from left to right, Angelica Ramirez, Kylen Branch, Coker, Clarice Martel and Austin Ayers, stand with the firstborn foal of the study, Fort Minor, and his mother, Tracey.

NACOGDOCHES, Texas - A healthy diet and exercise are important factors to consider when planning a pregnancy. Based on the results of a pilot study conducted at Stephen F. Austin State University's Walter C. Todd Agricultural Research Center, this holds true even if the prospective mother is tipping the scale near 1,000 pounds and has four legs.

Michaelle Coker, SFA's equine center supervisor, is responsible for managing the daily operations of the university's equine center, which includes a broodmare herd of seven mares donated to SFA's equine program by Nancy Batzloff and Trudy Day in 2015.

"The broodmare's job is to make babies," Coker said.

While this may be the mare's primary job description, members of the herd also have the opportunity to make their mark in the equine world through exhibitions of skill. In 2015, SFA's equine center's Missbehavenhollywood, or Holly for short, received reserve world champion honors in the open senior reining class and tied for top-10 honors in open ranch riding at the Palomino Horse Breeders of America World Championships. These days, however, Holly and four other SFA equine center mares are busy nurturing their foals under the watchful eye of Coker and students enrolled in SFA's equine reproduction course.

Coker explained that the equine reproduction class is offered in the spring to coincide with the equine industry's breeding season. In addition to the primary goal of providing students the opportunity to experience the equine birthing process, known as foaling, she saw the opportunity to conduct research exploring the effect of exercise on fecundity.

According to Coker, the equine industry has two types of broodmare owners. While some only breed a mare after she is retired from promotion and competition, others breed their mare and continue to engage in competitions and shows until five to six months into the animal's 11-month gestation.

"I wanted to see if there was a difference in reproductive efficiency comparative to the broodmare owners who turn them out to pasture and those who continue to work them," she said.

To increase her sample size, Coker volunteered two of her own horses to be involved in the study. The nine horses were then divided into groups of three for the investigation.

"What we ended up finding out is the moderate work that group three received is actually beneficial and helps decrease the number of cycles per conception," Coker said.

Following conception, the mares were regularly monitored and cared for by Coker and students in her equine reproduction lab. Each mare was placed under the care of four students responsible for monitoring the horse's progress. Once the mares began to display signs of impending labor, such as lose muscles in the hindquarters and a distended udder, they were placed in a stall equipped with a remote camera to allow for 24-hour monitoring.

Students then took shifts monitoring their designated steed every day from 6:30 p.m. to 8 a.m. until foaling was complete.

Coker explained that because horses are prey animals, 90 percent of mares foal at night when darkness provides an added level of security. Though this resulted in many late nights and little sleep for Coker and her students, the actual birthing process is relatively quick. From water break to delivery, the birth of the first foal, Fort Minor, took seven minutes.

Coker plans to continue using the center's broodmares to strengthen the results of this reproductive research pilot study and provide students with the irreplaceable experience the SFA broodmare herd provides.